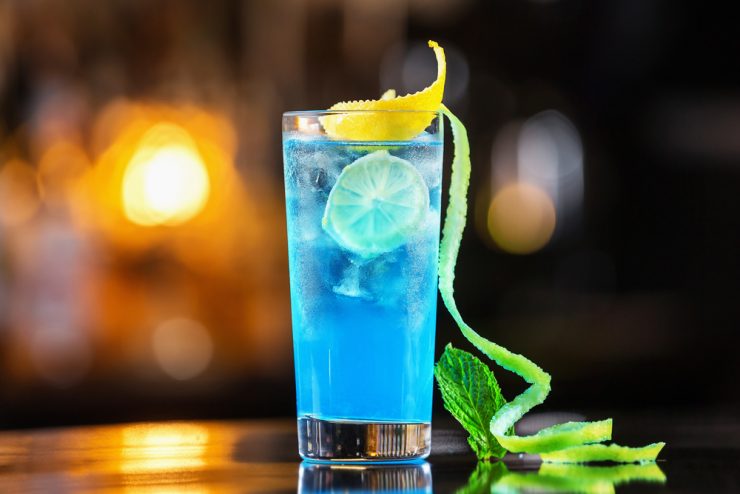 Is it the sort of cocktail you want to order in front of your inlaws? No. Is it a delicious, boozy drink that looks great? Yes, indeed. It’s the Adios Motherfucker; though you might prefer to call it an AMF, a China Blue, a Blue Motorcycle, or even “Walk Me Down”, as it’s known among the squeamish.

The name is a turn-on for some and a turn-off for others. It has a reputation, much like the Cosmo, as a trashy club drink for young people who just like to be edgy and say they tried it, or who like their booze so sweet that they don’t taste it going down.

But a good AMF doesn’t need mixes and doesn’t have to be trashy at all. It’s a fun drink that’s reminiscent of a John Collins or a Long Island Ice Tea and can be just as good when made with quality ingredients.

There’s literally just a little history here: this cocktail hasn’t been around all that long. It’s an American invention (surprise!) and first appeared in the 1980s. No one is sure who came up with it, and it slipped from popularity during the 90s only to resurge in 2015 and 2016.

The point, of course, is that it’s somewhat embarrassing to order, like a souped-up version of Sex on the Beach. The challenge is to boldly walk up and say the words with a straight face and no hint of embarrassment. Not everyone can do it, and that’s fine. Most bartenders will know what you mean if you ask for an AMF; though, will they respect you as much if that’s what you call it? That’s your call.

We’re going to give you two recipes. The first is the more popular way to make this drink, and it’s fine. It’s sweet, blue, and will do the job. The second recipe is more sophisticated, though no less blue.

All you need is a tall glass with ice.

Add in the ingredients one by one, then top it with the soda and garnish with a lemon slice or cherry (if you want).

Combine everything but the soda water in a cocktail shaker. Strain into a tall glass filled with ice and garnish as desired.

With any drink, the nicer the ingredients, the better the cocktail. In the first version, the sweet becomes overwhelming. That’s what you’re going to get in most bars, but the use of Sprite or 7-Up is just overkill, and especially if you’re throwing any old gin, rum, and tequila in there.

We recommend using soda water instead of Sprite, bumping up the amount of sour lemon juice to cut the sweetness of the syrup, and using high-end, drier, and lighter alcohols. If you do, you’ll have a great, sophisticated drink.