Brandy and whiskey are two of the most popular alcoholic spirits in the world. While they share many similarities, there are some key differences between them.

If you’re not familiar with these two types of alcohol, this guide will help you get started on your journey to understanding how brandy vs. whiskey compare and where they differ from each other.

In its simplest form, brandy is an alcoholic beverage made from fermented fruit juices. It is distilled wine, making it much more concentrated and smoother than actual wine.

Brandy gets its name from the Dutch word Brandewijn which means burnt wine. The word brandewijn later changed to brandy in English when Dutch traders first brought it to England in the seventeenth century.

Whiskey, from the Irish word for the water of life, is a distilled alcoholic beverage made from fermented grain mash. Whiskey production takes place in several countries.

There are three main types of whiskey:

Made in Scotland, this whiskey is aged in oak barrels for at least three years. Scotch whiskey exportation is a crucial backbone of Britain’s economy.

These whiskies are distilled in the U.S., aged in new oak barrels, and must contain at least 51% corn. They’re usually aged for no more than four years, but some can age for up to 20 years.

This type of whiskey must be produced in the U.S., aged in new oak barrels, and contain at least 51% rye grain (rye is a type of cereal grass).

Brandy vs. Whiskey: How They Match Up

The primary ingredient for brandy is commonly wine grapes pressed for their juice and then fermented into alcohol. After fermentation, that alcohol goes through distillation to become brandy. The final product is clear, like vodka, and has a similar taste profile. Its natural color varies from yellow to brown.

Whiskey comes from grains such as corn or wheat—usually barley. Hard liquor producers ferment those grains before distillation, similar to how beer brewers do with malted barley for beer-making processes.

You’ll notice that all whiskeys have an amber hue thanks to barrel aging. During this process, they take on characteristics of the wood inside each cask.

Brandy originated in France around the 13th century, and whiskey emerged from Scotland nearly 1000 years ago. Brandy was originally a medicinal drink, while whiskey was initially designed as an alcoholic drink for regions with no grapes or vineyards.

Today brandy can come from anywhere in the world. Most whiskeys come from Ireland, Scotland, or the United States. However, the most common types of brandy come from France, Spain, and South Africa.

Brandy is typically a sweet drink with a mellow flavor and aroma. The fermentation process for brandy involves fermenting fresh grape juice, so it’s naturally sweeter than whiskey.

Whiskey has a more complex flavor profile that can be described as an earthier taste and more distinct smell than brandy. In most cases, the aroma is because these whiskey varieties are aged in charred oak barrels during the distillation process.

Both brandy and whiskey are distilled spirits, but there’s more to the process than that. Brandy is made by fermenting grape juice until it becomes a high concentration of alcohol. The fermentation creates base wine that later goes through distillation. This step produces a concentrated alcoholic liquid that brandy makers age in oak barrels for years before bottling.

The whiskey production process is a long one that begins with a grain mash. The primary ingredient for whiskey includes cereal grains like wheat, rye, barley, yeast, and water. Whiskey producers mix the grains with hot water and enzymes to convert the starch into sugar. The liquid that results from this initial step is called wort, to which they add yeast and ferment for several days.

After fermentation, distillation takes place. This process involves heating the alcohol to separate it from the water so that only pure ethanol remains at the end of the process. The resulting liquid is known as whiskey, which goes through a process called maturing before it can be bottled and sold as a spirit.

Brandy is not just a beverage. It finds multiple applications in cooking, baking, and even deodorization. It is an excellent flavor booster when you add it to your dishes.

You can add brandy to sauces and glazes to give them a rich taste. You can make delicious desserts by adding brandy to your favorite cake recipes.

Its high alcohol content also helps keep your food moist while baking, so you don’t have to worry about dry bread or cakes.

Whiskey has been featured in chef recipes for centuries, particularly in Ireland and Scotland. You can add flavor to meat dishes such as beef stew or pork chops and baked goods like cakes and cookies.

You can use it to make marinades for poultry or seafood dishes or use it in place of water when making gravy for mashed potatoes or stuffing.

If you are looking for an exquisite drink that is smooth yet light on the palate, then you must try Jameson Irish Whiskey or Glenmorangie Signet.

If you’re a fan of both brandy and whiskey, or if you’d like to get into the game, here are some popular cocktails made with these spirits.

Here are five of the most popular Brandy Cocktails:

The cocktails below are tried-and-true favorites for any whiskey enthusiast looking for a delicious drink.

Are seasoned barrels common for brandy?

Brandy can be aged in wooden barrels previously used to age other spirits, such as whiskey and wine. This process is called “toasting” or “seasoning.”

This practice can help the final product develop more complex flavors, such as sweet flavors of vanilla, caramel, and honey. However, new oak barrels are the typical way to go.

What was the first brandy produced in the United States?

The first brandy produced and sold in the United States was made by French settlers, who had brought with them from their native land a desire to produce wine.

In 1780, they began making small batches of brandy from grapes and apples grown on the island of Martha’s Vineyard. This version of American Brandy was known as “Applejack” and became a household staple and an export item for sale overseas.

Is the whiskey industry more lucrative than brandy?

Brandy was once considered more prestigious than whiskey because it was considered of higher quality. Many believe that the finest flavors in brandy come from the finest barrels.

However, today there’s no denying whiskey has overtaken its counterpart in popularity among connoisseurs and casual drinkers. The global whiskey market was valued at US$ 542.6 billion in 2021. Statista reports a global revenue of US$ 57.41 billion for brandy in 2022.

As you may have noticed, there are many similarities between brandy and whiskey. However, some key differences make each of these spirits unique.

Brandies generally have a sweeter flavor than whiskeys due to their higher sugar content. However, this does not mean that all brands taste sweet or fruity. Whiskey is distilled from malted barley, rye, or corn, while brandy is distilled from grapes.

Both brandy and whiskey are popular today as cocktail ingredients because of their complex flavors and rich history. Both are enjoyable beverages but might not be everyone’s preference, depending on whether they prefer lighter spirits or heavier ones. Experiment away! 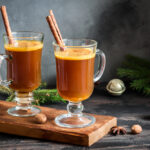 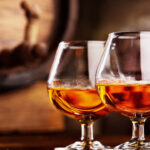