We’ll talk about whiskey’s carbohydrate content in this article, telling you all you need to know about your favorite liquor.

Whiskey does not contain any carbs, despite being frequently associated with grains. We’ll examine the causes of this and go over the ramifications for people trying to control their carbohydrate intake.

We’ll also talk about how whiskey is made and how it differs from other alcoholic beverages that do contain carbs.

Does Whiskey Have Carbs?

Whiskey doesn’t contain any carbs, fortunately. It is created from fermented grains, mostly alcohol rather than carbs, like corn, rye, or barley.

The grains are ground into a fine meal, combined with water to make a mash, and then fermented with yeast to turn the grain’s carbohydrates into alcohol during manufacturing.

Is Whiskey OK on Keto?

Yes, you can drink whiskey while following a ketogenic diet. Whiskey is a good choice for people on a low-carb diet because, as was already established, it has no carbohydrates.

Additionally, it doesn’t include sugars, a frequent source of carbohydrates in alcoholic beverages.

However, it’s crucial to remember that whiskey does include alcohol, which the body can convert into the ketone acetone.

It’s crucial to drink moderately while on a ketogenic diet since excessive alcohol consumption can prevent the body from going into ketosis.

It’s also a good idea to steer clear of adding sugary mixers to whiskey because doing so can raise the amount of carbohydrates in the concoction.

Does Whiskey Have Sugar?

Whiskey doesn’t have any sugar in it. It is created from fermented grains, primarily, rather than sugar, such as corn, rye, or barley.

What Alcohol Has the Lowest Carbs?

Except for a few sweetened variations, the majority of alcohols do not include carbs. The varieties of alcohol with the lowest carbohydrate content among those without carbs are whiskey, vodka, gin, tequila, and brandy–among others.

It is significant to remember that alcohol’s carbohydrate content might vary based on the kind and brand. The added sugars in some sweetened or flavored variants may raise the amount of carbohydrates.

While whiskey does not have any carbohydrates, it is vital to bear in mind that it does contain alcohol, which can be converted by the body into acetone, a ketone.

It’s crucial to drink moderately while on a ketogenic diet since excessive alcohol consumption can prevent the body from going into ketosis.

Additionally, it’s a good idea to steer clear of adding sugary mixers to whiskey because doing so can raise the amount of carbohydrates in the concoction. 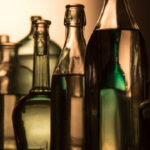