Scotch whiskey uses water, yeast, and another type of grain, like malted barley, to produce a strong and sweet liquor.

There are many different types of scotch drinks, brands, and distilleries in the United Kingdom — so how do you find the kind of Scotch that you will like best?

Understanding the various types of Scotch to choose from when pairing it with food, ordering in a restaurant, sipping at a distillery, or purchasing for a dinner party is key to becoming an advanced whiskey drinker.

Let’s check out the long list of Scotch whiskey types and the five main types of Scotch that differ in flavor profiles, appearance, and taste.

There are five main types of scotch whiskey that buyers and drinkers should know before purchasing at a bar, scotch shop, liquor store, or restaurant.

Usually, blended-grain scotch whiskey is rarer and more unique than single-grain whiskey. This blend is well known for having a strong flavor that usually resembles rye, corn, malted barley, or wheat.

A blended grain scotch whiskey combines various malts and grains from different distilleries. Single grain blends are typically known for being lighter. In contrast, blended grains are known for having a more distinct and robust flavor profile.

After the distillation process, the scotch whiskey is then divided into separate categories — one being blended Scotch whiskey. Blended scotch whiskey uses malt and grain whiskey from two different distilleries.

Some of the most common blended scotch whiskey types you can order online or from a store include Ballantines, Teachers Highland Cream, The Famous grouse, Vat 69, Cutty Sark, Chivas Real, SIA Scotch Whiskey, and Jonnie Walker.

The ‘malt’ within the blended malt scotch whiskey is the malted grain used in creating the whiskey product. When creating Scotch whiskey, barley is used instead of rye, wheat, or corn mash.

The specific distiller can choose the flavor profiles and the additional grains added to the water and barley, such as rye, corn, or wheat.

Single-grain scotch whiskeys are distilled using column stills, a unique distillation method that is quite unique from the pot stills method.

Column stills feature two columns to distill a spirit. After the distiller adds the additional ingredients to the whiskey, it is no longer considered a single malt beverage.

The term ‘single malt’ means that the whiskey has only been blended and distilled in one distillery in Scotland. Similar to other types of Scotch whiskey drinks, single malt Scotch must be distilled within the country and utilize oak casks to soak the liquor for at least three years.

The first production of single-malt Scotch whiskey dates back to the late 15th century. After the initial production, the following centuries saw taxes and fees applied to whiskey production, with Parliament creating the Excise Act and punishments on local distillers and landowners.

However, the late 20th century saw a huge bloom in the production of single malt Scotch whiskey in Scotland, with 110 distilleries present in making single malt whiskey.

Some of the most common types of single malt Scotch whiskey are The Glenlivet 12 Year Old, Bruichladdich The Classic Laddie, Aberlour 16 Year Old, Auchentoshan American Oak, Aberfeldy 12 Year Old, and The GlenDronach Original.

There are also independent bottlers and distillers that are very common in the country, such as Douglas Laing and Co and Blackadder.

There are different Scotch whiskey regions within the country that produce distinct flavor profiles and appearances in their whiskey beverages.

Campbeltown is a tiny island near Islay in the southeastern section of the Highlands in Scotland. Although it is not the largest, this region still contains a whopping 34 distilleries!

Campbeltown whiskey is known for its pungent taste, often including smoky aftertastes and flavors.

The Highlands region in Scotland is known for its wide variety of flavors and appearance regarding whiskey types. The prevalence of light whiskies, deep whiskies, and spiced malts makes the Highlands one of the most versatile areas of production for all types of whiskey drinkers.

In the northern part of the highlands, you will find whiskies that are sweeter and richer, such as in Dalmore. In the eastern section, there are fruitier and lighter whiskies, such as those found in Aberfeldy or Glendronach.

The whiskies in the Western Highlands region have a strong peat flavor, such as those from the coastal area of Oban.

The islands of Scotland produce unique whiskies. Still, they are not recognized under Scotch Whiskey Regulations 2009 in the Scotch Whiskey Association.

Even so, the most famous locations in the islands where Scotch whiskey is distilled include Highland Park and Jura, both of which use smoke, pepper, and honey in their distinct whiskey types.

Islay is an island in the southwestern region of the Highlands in Northern Scotland. This region is famous for its extreme use of peat in its whiskey blends. Furthermore, many of the residents living on this small island are tied to the whiskey business.

The most famous distilleries in Islay include Bruichladdich, Lagavulin, and Ardbeg. Most distilleries use soap, apples, kippers, and seaweed notes in their liquors.

The Lowland region in Scotland offers a more refined and subtle flavor profile to their whiskey production instead of a deeper and darker spiced whiskey.

The most common notes used in this type of whiskey include honey, ginger, toast, cinnamon, and grass. Many Scottish whiskey drinkers prefer to have a dram of this liquor before a fancy dinner party.

The most famous whiskey types from the Lowlands include Lenticchie and Auchentoshan, especially considering there are less than five significant distilleries in this region.

Some of the most popular types of whiskey from the Lowlands include the Auchentoshan 12-Year-Old, Auchentoshan American Oak, and the Blandoch Talia 25-Year-Old.

Speyside is a region within Scotland famous for its use of fruit and natural plants in its whiskey production. The famous ‘Speyside Way’ reflects the region’s focus on the glens, plants, flowers, and fruit. Speyside whiskey uses deep spices, like vanilla and honey, to create a unique flavor.

The most famous Speyside whisky distilleries include Glenlivet and Glenfiddich. In fact, the Glenfiddich is the best-selling single malt whiskey in the entire world.

You can make numerous cocktails using Scotch whiskey types from various distilleries around the country.

Before buying or ordering a scotch whiskey, check out these commonly asked questions from whiskey drinkers.

What is the best way to drink Scotch whiskey?

One of the best ways to drink Scotch whiskey is to sip it neat. Many experienced whiskey drinkers tape small sips of whiskey and have cold water in between to refresh their palate.

You can add water to your whiskey to create a new flavor profile. Another way to enjoy Scotch whiskey is to mix it with other ingredients in a cocktail.

How should Scotch whiskey be stored?

Scotch whiskey should be stored in a cool location where the temperature doesn’t change between very hot and very cold temperatures.

Whiskey owners should keep their liquor in a temperate location that does not get any warmer than 20 degrees Celsius.

Which Scotch is ideal for beginners?

Some of the best Scotch whiskey types for beginner drinkers include sweet and fruity types with hints of vanilla, honey, or sweetness.

For example, Speyside Scotch combines fruit with honey and vanilla. Other options include Aberfeldy 12-Year-Old with honey and pineapple notes, Johnnie Walker Black with smoke and vanilla notes, or The Balvenie 14-Year-Old Caribbean CAsk with brown sugar and orange notes.

Scotch whiskey is a type of whiskey made in Scotland using malted barley. Some scotch whiskey types include other ingredients that can change the flavor profile, such as blended malt whiskies or blended single malt scotch whiskies.

This unique type of alcohol uses cereals, yeast, and water to create a distinctive flavor profile. For example, scotch drinkers can either sip this strong liquor neat or use this liquor in cocktails, such as in the Penicillin or Scotch and soda.

Check out My Bartender today to read more about Scotch whiskey and find out the specific type you want to order for your upcoming dinner date or house party.

Leave a comment below to tell us about your favorite type of Scotch! 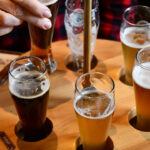 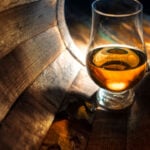