In the bar and cocktail industries, jiggers are small measuring devices that are frequently used to precisely measure out the amounts of liquid ingredients for mixing drinks.

It is a necessary tool for any bartender since it enables them to consistently make delicious cocktails. A jigger is typically an hourglass form with a smaller measurement (commonly 1/2 ounce) on one side and a bigger measurement on the other (usually 1 ounce).

It is a cheap and practical tool to make sure drinks are mixed in the right quantities and is often made of metal or plastic. We shall explore into the jigger’s past and current applications in this post, as well as provide advice on choosing and employing one.

Is a Jigger Equal to a Shot?

A shot is a word used frequently to describe a serving of alcohol that is typically 1.5 ounces, while a jigger is a measuring device used to measure out exact amounts of liquid substances.

It is important to keep in mind that the term “shot” is not a standard unit of measurement and that its size might change depending on the situation and the place.

A shot may weigh as little as 1 ounce or as much as 2 ounces depending on the nation or region.

What is a Jigger in Alcohol?

In the context of alcohol, a jigger is frequently used while preparing cocktails to measure out the various components, including the alcohol. The quantity of each ingredient is based on the size of the jigger.

One “shot” of vodka will be added to the cocktail, for instance, if a recipe calls for a 1-ounce shot of vodka and a jigger with a 1-ounce measurement is used.

A smaller jigger, such as one that measures only 1/2 ounce, would require two “shots” to equal the 1-ounce quantity specified in the recipe.

How to Use a Jigger

Hold the jigger so that the desired measurement is facing up.

The liquid should be added to the jigger until it reaches the measuring point at the top.

Stop pouring as soon as the liquid reaches the top of the mark. Any liquid that overflows the mark should be thrown away so as not to overpower your drink.

Whenever a mixing glass, cocktail shaker, or other container is required, carefully pour the measured beverage into it.

Because it makes it easier for them to determine the precise amount of liquor they are pouring, bartenders often hold the jigger with the measurement they need facing upwards.

The bartender can readily monitor the liquid level while it is being poured when the jigger is held in this position, ensuring that they stop pouring once the measurement mark is reached.

This is particularly vital when preparing cocktails because exact measures are necessary to ensure that the ingredient ratios are matched and the drink tastes well.

The bartender can pour the drink more precisely and conveniently by holding the jigger with the measurement facing up.

The liquid flows more easily when the jigger is held in this position, which may make it simpler.

Now you can get mixing like a pro and make some tasty drinks for you and your friends. Just be sure to always drink responsibly! 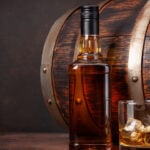