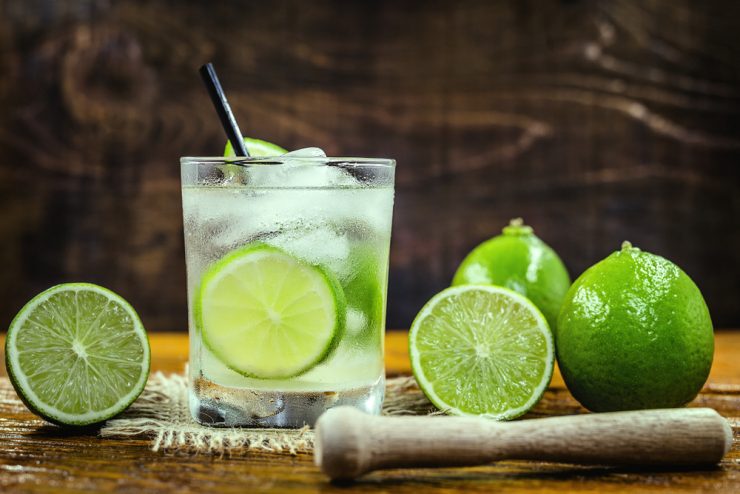 A South American classic, the caipirinha is Brazil’s national cocktail. Created with a blend of cachaca, sugar, and lime, it’s wonderfully sweet and surprisingly refreshing too, perfect for sipping on a summer’s day or sharing with friends from a large jar.

History of the Caipirinha

Like many cocktails, this Brazilian drink has a hazy history, and nobody is quite clear on where or how it was first officially created. One story suggests that the drink came about in 1918, originally blended with honey and garlic to ward off the Spanish flu. Another tale claims that the drink is an off-shoot of the Portuguese ‘Poncha’ – a traditional drink made with cane sugar liquor, sugar, and lemon juice.

Yet another theory claims that the drink was invented by Brazilian farmers in the State of Sao Paulo. This would explain the name, as the word ‘caipara’ means ‘rural people’ in Brazilian Portuguese. But regardless of which story is true, the drink has strong associations with Brazil and has proven popular elsewhere around the world too, savored for its rich sweetness and favored by many people as a ‘home remedy’ for common colds, too.

How to Make It – Recipe

You only need a few simple ingredients to put this cocktail together, and the preparation is relatively simple, so you won’t need to be an expert mixer to whip up a glass. The ingredients below should produce enough to fill an old-fashioned glass, but you can adjust accordingly if you’re preparing a larger batch to share with friends.

One of the beautiful aspects of this particular cocktail is that you can play around with the formula in a lot of fun, fruity ways. Many Brazilians and other cocktail connoisseurs across the globe like to exchange the lime for other fruits, such as kiwi, strawberry, and passion fruit, or you can keep the lime and add these other fruits to add additional layers to the final flavor. Here are a few other variations you might like to try:

This cocktail is an important part of Brazil’s identity, right up there with samba and soccer as an integral component of Brazilian lifestyle and culture. It’s a cocktail with a lot of character and personality, and it’s the perfect choice for people who like their drinks sweet, tangy, and refreshing.