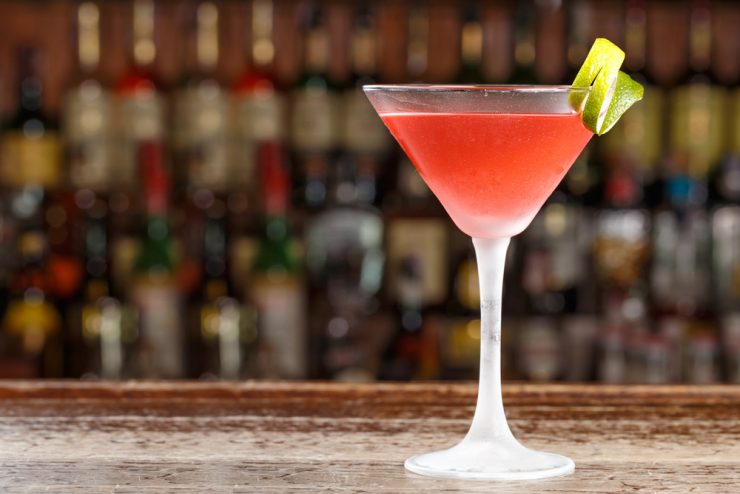 There is a certain fascination surrounding the Cosmopolitan and its rise to fame. Cosmo became a household word during the 1990s when “Sex in the City” was what everyone was watching. Its attractive pink color was the perfect complement to the sophisticated ladies on the show, making it the ideal drink of choice for the stars of the HBO series. The Cosmo didn’t make an appearance until season 2, but once it did, the gal pals were never seen out and about without one.

Throughout the nineties, people in bars and in clubs could not get enough of the cosmopolitan, and a night wouldn’t go by without bartenders churning them out by the dozens for guests with an obsession for this popular drink. Bartenders often came up with variations to keep things interesting, such as the White Cosmo, which used white cranberry juice, and substituted St. Germain for Cointreau. Some would even replace the vodka with gin or tequila for those who were looking to take it up a notch.

Author and veteran bartender Gary Regan claims that the Cosmopolitan dates back to 1985, and credits Cheryl Cook, a mixologist from Miami for first serving it up in South Beah at The Strand. She was looking to create something that would taste as good as it looked in a Martini glass, so she played with the tried-and-true Kamikaze by adding a bit of cranberry juice and testing out a citrus-based vodka which was new to the shelves at the time.

Whose Drink Is It?

Not surprisingly, there have been others who have stepped forward who claim to have come up with the recipe. Despite Regan and others being convinced that it was Cook who got people hooked on this simple but delicious cocktail, several bartenders have called it their own, so it is still up for debate.

Some are convinced that it was Dale DeGroff from NYC’s Rainbow Room who started it all, and others give credit to Toby Cecchini who was tending bar at the Odeon in 1988, also in New York. One thing that everyone can agree upon is that it was Cecchini who was behind the Vodka Cranberry ‘Tini craze. His recipe was made with 2 ounces Absolut Citron, 1-ounce of Cointreau, 1-ounce fresh lime juice, 1 ounce Ocean Spray cranberry juice, garnished with a twist of lemon.

The Cosmo came into being at the perfect moment. As far as spirits were concerned, vodka was unrivaled towards the end of the 80s and into the 90s with the newer flavored vodkas just coming onto the scene. After Absolut released its Citron, the flagship of its flavored vodkas, bartenders everywhere suddenly had something new to get creative with.

For Cecchini, using Citron in his Cosmo with Ocean Spray cranberry was a match made in heaven. If you prefer a different brand, feel free to use that instead; just keep in mind that you won’t want to have a heavy hand with the juice. For the seasoned Cosmo drinker, the hue of the drink will reveal if too much juice has been added. 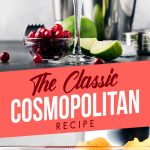 There is something to be said for a cocktail that can gain the attention of so many so quickly. The Cosmopolitan is a perfect combination of light, and tart, with a hint of sweetness, and can be enjoyed no matter what the occasion. If you haven't already, jump on the bandwagon and see what the buzz is all about with this cocktail recipe.
Keyword Cocktail, Cosmopolitan, Martini
Prep Time 3 minutes
Servings 1
Author My Bartender

There is something to be said for a cocktail that can gain the attention of so many so quickly. It is a perfect combination of light, and tart, with a hint of sweetness, and can be enjoyed no matter what the occasion. If you haven’t already, jump on the bandwagon and see what the buzz is all about.