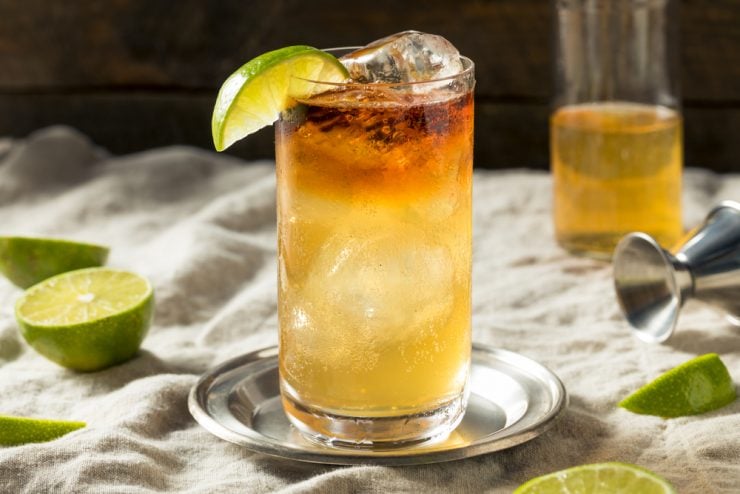 If you’re looking for a cocktail that’s spicy, refreshing, and bold, the Dark ‘n Stormy is a fine choice. Mixing dark rum and ginger beer, it’s a delicious and simple-to-craft cocktail that is enjoyable on its own or paired with a range of snacks and dishes, and it’s a drink with quite an intriguing story behind it, too.

History of the Dark ‘n Stormy

Many cocktails have intriguing origins, and this one is no different. Given that dark rum is a famous sailor’s drink and ginger beer has been popular for centuries too, especially around the Caribbean region, it’s highly likely that sailors traveling around those islands mixed these two ingredients together at one time or another. However, the official Stormy cocktail itself has a very specific story.

It was created by the Gosling Brothers Ltd company, the Bermuda-based creators of Gosling Black Seal Rum. The company dates all the way back to the early 1800s, and in 1991, they filed a trademark on this cocktail’s name, meaning that any bar wanting to sell this drink needs to use Gosling’s rum in the recipe. They’ve even gone to the length of filing lawsuits against other brands trying to copy the formula.

How to Prepare it – Recipe

As explained above, if you want to stick to the original recipe for this cocktail, you’ll need to get your hands on some Gosling Black Seal, as well as some genuine ginger beer. Ginger ale can be used, but doesn’t provide the same effect, and, of course, there are no restrictions on experimenting with other dark rums in the comfort of your own home. This drink is traditionally served in a highball glass, and the recipe below will fill one glass.

This cocktail may sound a little intimidating at first, with so much spice and heat in both of its core ingredients, but it’s surprisingly refreshing and can be sipped down as a midday treat or later on in the evening too. As a classic Caribbean cocktail, it works well with seafood and Caribbean dishes, also pairing nicely with barbecued meats and Asian cuisine too.

Traditionally, this cocktail comes with a lime wedge. Drinkers are encouraged to squeeze the wedge to add a little tangy juice to the blend as they drink it, and some bars will include lime juice directly in the recipe too.

This isn’t the most versatile cocktail around, but there are still a few ways you can adjust the recipe. As stated earlier on, you can try it out with ginger ale if you want a softer cocktail with a little less kick to it, and you can try to work with different rums too. There’s also a cider version, known as a Cider and Stormy, which exchanges the ginger beer for cider. The Fall version, meanwhile, includes bourbon, cider, ginger beer, and lemon juice.

Whether it’s a dark and stormy night or a sunny eve spent by the pool, this drink always goes down well.