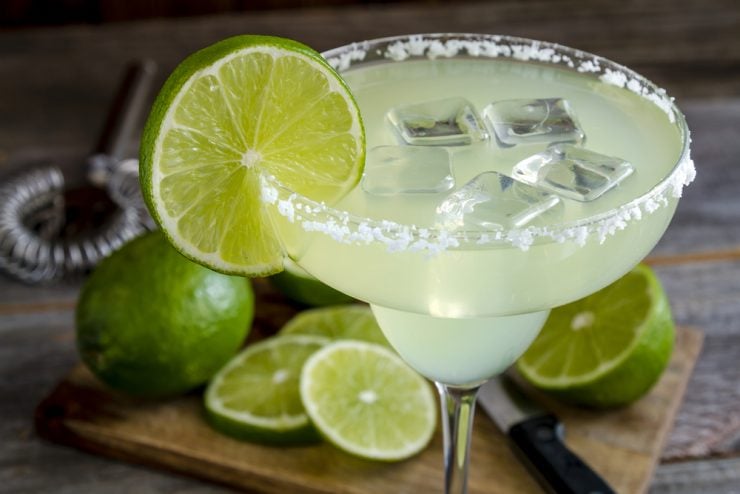 As one of the most well-known drinks in North America and beyond, the Margarita is a blend of sweet orange liquor and tangy lime. The classic drink is not only delicious and potent, but if prepared fresh, it also contains plenty of Vitamin C from the lime juice. Although its origins are not certain, the cocktail has been around for many decades and continues to be served all around the world.

There are several different theories as to where and how the cocktail originated. Some believe that it was first made in 1948 in Acapulco, Mexico by a Dallas socialite. But another theory states that it is a twist on the Daisy, a very similar drink featuring spirit, citrus, orange liqueur and soda. This is supported by the fact that the cocktail’s name means ‘Daisy flower’ in Spanish.

Since then, many different versions have been invented, such as one where the orange liquor is completely removed, or a $2,500 drink making use of the costly Clase Azul Ultra añejo tequila.

What’s more, there is a frozen option, created in a soft-serve machine in 1971 that is now on display in the National Museum of American History in Washington, D.C. Today, you can obtain frozen cocktails in many restaurants and bars thanks to this invention.

The classic version of this drink is prepared with blanco tequila, made 100% from blue agave. Although you can use a tequila that’s not labelled blanco, this won’t create the same superior drink because it will contain up to 49% mystery sugars. Similarly, many people use premade sour mix, but to get the flavor just right, it’s essential that you use fresh lime juice.

If you follow the original recipe, you will also add orange liqueur, although some versions call for this to be replaced with agave syrup. Similarly, you can add some salt and a lime wheel as garnish.

As mentioned, you can create many different versions of the drink by slightly altering, adding or removing some ingredients. However, this classic recipe, made using original ingredients, is sure to delight, no matter where you decide to drink it. To create a refreshing and delicious cocktail, use the best ingredients you can find. In addition to this list, don’t forget about the ice.

The cocktail is reasonably easy to make, requiring only three steps:

1. Pour all of the liquids into a cocktail shaker filled with ice and shake the mixture until it is well-chilled

2. Strain your drink over some fresh ice into a rocks glass

3. Garnish it with the lime wheel and some kosher salt to taste

As a traditional and well-known drink, this cocktail is beloved all over the world because of its blend of tangy lime and sweet orange liquor. While many people can’t agree on how and where it was made, this does not detract from the delicious taste of the mixture.