Perched along the shores of Lake Michigan, Chicago is a bustling, world-renowned Midwestern metropolis. Along with world-famous architecture and a slew of Michelin-starred restaurants, Chicago is home to some of the nation’s best comedy clubs.

Many of the most famous comedians got their start as regular acts in Chicago’s comedy bars, including Dan Akroyd and Steve Carell.

Wondering where to get a drink in the windy city? Here’s a list of the best comedy bars in Chicago.

Located in Old Town, a few blocks from the Sedgwick L stop, Zanies Comedy Night Club has been a Chicago institution since 1978.

Zanies have a full schedule of comedy shows most nights of the week in a restaurant and bar space centered around a stand-up stage.

I love the diverse menu of cocktails, beer, snacks, and mocktails for the kids.

With nearly 70 years as an iconic Chicago club, Second City opened as a burlesque theater and improv club in 1959.

It has been the birthplace of some of the nation’s most well-known comedians, like Dan Akroyd, and it’s one of the best places to go out.

Located along Chicago’s famous Magnificent Mile in Streeterville, The Comedy Bar is a quirky downtown venue with friendly staff, a stellar comedic lineup, and a 140-seat main stage.

The Comedy Bar has a rooftop terrace to enjoy a tasty cocktail during intermissions. They also serve a full dinner menu, supplied by Gino’s East, one of Chicago’s premier Chicago-style pizzerias.

The Comedy Clubhouse is a famous improv club inside a bright purple building in Wicker Park. The interior has impressive curved ceilings, black walls, and stained-glass windows.

The renowned Comedy Clubhouse has a self-serve drink wall with selections of beer and cider, along with wine and cocktails for purchase.

Located in a high-ceilinged theater space in the Belmont Theater District, Laugh Factory is an adult-only comedy club and bar. They pride themselves on being inclusive and giving back to their community.

Not only do they have a lineup of professional comedians, but they also have amateur comedy contests, podcasts, and a comedy magazine, making it one of the best fun places to go out.

Located in Lake View East in an industrial-chic space with brick walls and exposed wood beams, Annoyance Theatre & Bar is a fun improv theater and bar.

It’s been delivering laughs to adolescents and adults for over 30 years. They have themed events and have created hundreds of original comedy sketches with an ever-changing cast of professional comedians.

Unlike a typical comedy club, Drunk Shakespeare offers a group of professional actors who must drink shots while they attempt to perform a Shakespearean play.

Opened in 1981 by Charna Halpern and David Shepherd, iO Theater is a comedy theater and acting school.

They have various programs for improv classes, acting, writing, and standup, taught by the staff that you’ll then see perform during comedy events in the theater.

I love The iO Theater’s bare-bones, industrial space in the heart of Chicago’s Old Town.

Combining Chicago’s comedy and architectural fame, The Lincoln Lodge is a colorful theater and bar space with various design themes.

Located in Palmer Square, The Lincoln Lodge has weekly lineups that feature stand-up, variety acts, and a unique “Man on the Street” act. Their creative cocktails have garnered praise from diners on OpenTable and Yelp.

Known simply as CSZ Theater Chicago, ComedySportz Chicago is a comedy theater that has been entertaining all ages for over 35 years.

The Wicker Park theater is an intimate space with quirky wallpaper as the backdrop for a modest stage. CSZ Chicago has stand-up, but they specialize in an improv battle between two teams of their house actors.

Located in Hyde Park, The Revival is one of the best comedy bars in Chicago. It is an airy, brightly lit bar and improv theater that started in 1955.

The theater began as a conventional playhouse, using scripted material, and was one of the first to adopt a purely improvisational format.

Today you can take improv classes or attend one of their lively improv shows with a tasty cocktail in hand.

If you’re looking for fun places to get drinks, any of the Comedy Bars in Chicago will have you laughing out loud all night long. Most have been in the laughing business for decades, making Chicago the nation’s comedy capital.

Let me know which comedy bar you enjoyed the most during your time in Chicago in the comments section below. 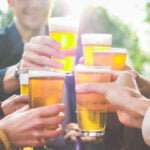