Named for the Duke of York, New York City has been a treasured American city since its founding in 1624. History buffs will find a wealth of iconic landmarks and museums to delve into the Big Apple’s rich past.

If you want to combine your love of history with your love of alcohol, New York has plenty of centuries-old bars to explore.

Read on to discover my list of the oldest bars in NYC and where to get a drink.

Lying on the border of NoHo and the East Village, McSorley’s Old Ale House is NYC’s oldest Irish Tavern, opened in 1854 by John McSorely.

The pub is lined with old newspaper clippings and framed photographs with its original sawdust floors. All the bartenders are Irish, serving classic Irish ales in giant handled pint glasses with cheese and crackers for snacks.

Next up on my list of the oldest bars in NYC is Ear Inn, nestled inside the equally historic James Brown House in Hudson Square.

One of the most fun places to get drinks, it opened in 1817 and is a fine example of Federal Era architecture. The traditional American cuisine features old-school favorites, including my favorite, chicken pot pie.

You’ll also get classic cocktails and 12 draught beers on tap.

Established in 1762, Fraunces Tavern is the oldest functioning tavern in NYC. Its famed role in the American Revolution as a meeting place for the Founding Fathers is documented in the Fraunces Tavern Museum, located on the premises of the multi-roomed building.

Once a 19th-Century German restaurant and gathering place, Old Town Bar has been a beloved part of the Flatiron District since 1892.

The turn-of-the-century building with its rich wood and carved wall interior has a cozy, friendly feel, serving decadent bar fare like chili bowls and New York deli sandwiches to accompany a list of beers, cocktails, and spirits.

Opened in Lincoln Square in 1884, P.J. Clarke’s has served the same American menu since the first day. They have opened various locations in the Northeast, but the original tavern is their pride and joy.

They offer many food classics and a long list of traditional, craft, and seasonal cocktails, beer, wine, and spirits.

Although the White Horse Tavern opened in 1880, it’s most famous for its association with Beatniks and Bohemians during the 50s and 60s.

Located in the heart of the West Village’s Greenwich Village, this tavern is a quaint and cozy spot for cocktails, beer, wine, and American pub fare.

Found in Gramercy Park, Pete’s Tavern is a landmark bar and restaurant inside an old 1850s hotel and grocery. It opened in 1864 but wasn’t called Pete’s until 1922 when Peter D’Belles purchased it and added its iconic rosewood bar.

The kitchen offers brunch, lunch, and bar snacks menus that are kid friendly. They also have beer, wine, cocktails, and an extensive spirits list.

The oldest bars in NYC are as old as the US itself, offering a wonderful guide to the city’s rich past while still being fun places to go out.

After enjoying a cocktail, brew, or decadent pub meal in the oldest bars, I’d love to hear about your experiences in the comments below. 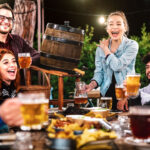 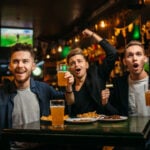