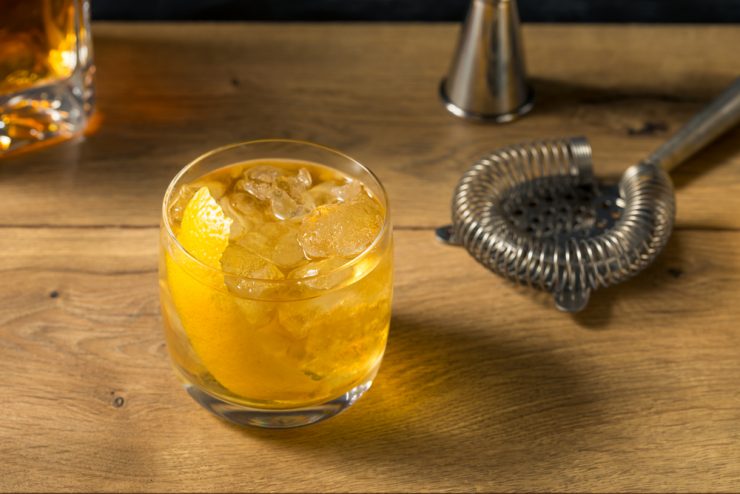 My Bartender > Scotch > The Rusty Nail

If you’re looking for a connection to the Rat Pack of the 1960s, you can’t do better than with a Rusty Nail. This drink was, for a long time, the last word in sophistication, and it’s still a suave pick-me-up today. It’s simple, easy to make, and requires just two ingredients: Scotch and Drambuie.

The first time we know this cocktail appeared was in the late 1930s at a British Industries Fair in New York City. At the time, it was known as the BIF, and it was not terribly popular. It was just like today’s Nail only with a dash of bitters added in.

Fast forward into the mid-50s and suddenly the cocktail was back, going by a half dozen different names. Some of the more popular, in addition to the name we now know it by, included Mig 21, Little Club No. 1, D&S, and Knucklehead. The reason the nail moniker stuck was down to the chairwoman of Drambuie, who wanted a settled name for a popular drink in which Drambuie features so heavily.

The Rat Pack were a group of entertainers who enjoyed making movies (and music) together. The most famous members of the Pack were Frank Sinatra, Dean Martin, and Sammy Davis Jr. They were also enamored of this cocktail, which powered their crazy antics while allowing them to look smooth at the same time.

The basic recipe for this drink couldn’t be simpler. All you need is one and a half ounces of Scotch and three-quarters of an ounce of Drambuie. You mix them with a bit of ice, stirring until they are well-chilled, and strain it out into a rocks glass with one ice cube.

This is a golden liqueur made from Scotch whisky, herbs and spices, heather, and some honey. It’s been in private production since the late 1880s, though Scottish legend has it that Prince Charles Stuart, after losing the Battle of Culloden in 1746, fled to the isle of Skye and gave the recipe to John MacKinnon as a reward for sheltering him.

Who knows if that’s true; but it is true that Clan MacKinnon had the original recipe and gave it to James Ross, who was the first to bottle and sell Drambuie.

Some people substitute bourbon for the Scotch, in which case it may be called a Rusty Spike. Some people like a dash of bitters, which was part of the original 30s recipe, but most find this unappealing. Some will even throw in a splash of Cointreau, though you could argue that it’s no longer the same cocktail at that point.

However you like it, it’s a drink for those who appreciate fine alcohol. Enjoy!