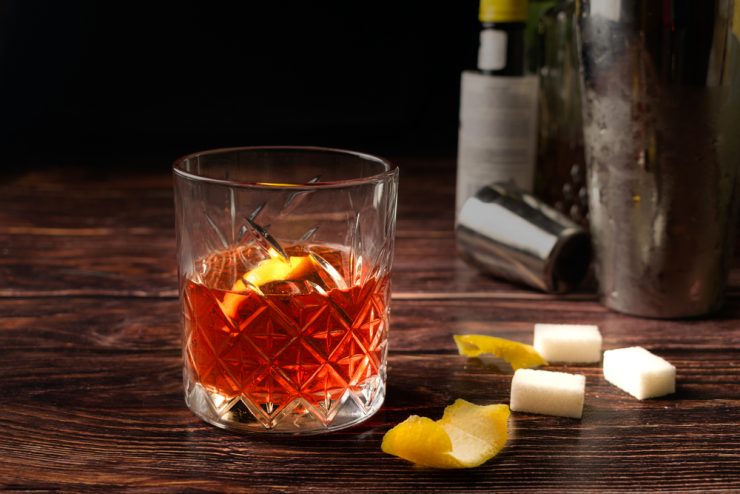 Probably the most famous cocktail from New Orleans is the Sazerac, created in the 1800s. This classic cocktail has a simple and straightforward recipe that provides the perfect way to enjoy rye whiskey.

You only need four ingredients to make this delicious drink: rye whiskey, Peychaud’s Bitters, anise liqueur, and a sugar cube. The bitters, anise, and sugar cube perfectly balance the spicy rye whiskey, making this cocktail one of the most commonly enjoyed the world over.

However, just like many other popular cocktails, there is more than one opinion on making it the right way. Some people even use absinthe to rinse out the glass first, adding an aromatic and robust kick to this famous cocktail. There are also several variations on what type of bitters, rye whiskey, and anise liqueur should be used. However, the trademarked recipe uses the official rye whiskey, Herbsaint anise liqueur, and Peychaud’s Bitters.

There’s no denying that this cocktail is a sophisticated and traditional choice for enjoying rye whiskey. While there may be many variations to the recipe, there are a few taboos to avoid when making this famous Southern drink. To start, you should never, ever shake the whiskey and bitters to combine it before straining. Shaking this cocktail is a major faux pas!

You should also never serve this signature New Orleans libation on the rocks or in a cocktail glass. Instead, it should be served in an old-fashioned glass that’s oversized. The last part to remember? Don’t let the lemon peel touch the actual liquid. Instead, twist and express those fragrant oils right over the glass, then you can hang the peel over the rim or simply throw it away.

This deliciously balanced cocktail has been around since the early 1800s. Antoine Amedie Peychaud, the owner of an apothecary, mixed cognac with his Peychaud’s Bitters. Eureka! A star was born. A few years later, it became the signature cocktail of the Sazerac Coffee House, located in none other than New Orleans, Louisiana. In 1869, the bar switched ownership to a bartender named Thomas H. Handy.

Eventually, Handy added Peychaud’s Bitters to his flourishing liquor business. By the turn of the century, he had replaced the brandy with rye whiskey and was selling the delicious drink by the bottle. Since absinthe was banned in the U.S., it was simply swapped for anise. However, the ban was lifted in 2007, so you can enjoy an absinthe rinse next time you make this classic cocktail.

It’s easy to see why this spicy cocktail has so many different variations since it has almost two centuries of history. It’s fun to discover the various flavor profiles and the effect that even a minor change can make when creating this signature New Orleans cocktail. Here are some of the most popular variations:

This signature New Orleans cocktail provides a balanced and robust flavor and a delightful kick of rye whiskey. The famous cocktail has been around for almost 200 years, and it’s easy to see why it continues to be a popular choice for those who imbibe. No matter which recipe variation you try, you’re sure to enjoy this strong yet oh-so-delicious rye whiskey cocktail.