We can’t all be heroes. Not every colonel or lobbyist ends up with a monument, some end up entirely forgotten. Colonel Joe Rickey is lucky.

Rickey ended up with something far more fun than a statue. He got that’s enjoyed by millions of people around the world. Enter: the Bourbon Rickey.

About the Bourbon Rickey Cocktail

Colonel Joe Rickey, the man whom the Bourbon Rickey was named for, was a Democratic Lobbyist. Towards the end of the 1800s, he was living in the US capital where he frequented a little tavern called Shoomaker’s bar.

He was quite well-known by the generous bartender George Williamson, as his then-regular drink stood out. Rickey disliked sugary drinks, so he only drank bourbon mixed with sparkling water, which refreshed the colonel and served him well.

Rickey’s drink was standard and basic until one day, Williamson decided to spice up the drink with some fresh lime juice to see how Rickey would like it. Rickey clearly loved it, hence the drink’s popularity that became widespread in the 1890s and still stands strong today.

The Gin Rickey: A Twist on the Classic

The Rickey drink has one more beverage that greatly resembles it, born in the 1890s and still popular today. When the original beverage was gaining its popularity, people tended to make it with gin instead of bourbon.

With those ingredients and such a simple mixing method, you’ve got yourself a fantastic, strong bourbon drink. Be sure to think of Colonel Joe Rickey when you take your first sip. 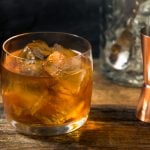 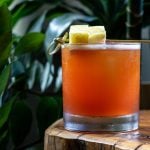