An uncomplicated, textbook mixed drink–just gin/vodka, sugar, and lime–the Gimlet is a prize amid quintessential cocktails, boasting a storied past that ranges from the British Navy to Manhattan. Pale sage, prominently citrusy, and superb when done properly, this gin sour is both energizing and staves off scurvy–what more could you ask?

The ingredients below use the hip-and-modern blend of fresh lime juice with simple syrup and fresh lime zest instead of Rose’s. But if your inner purist will accept no substitutes, combine one ounce of Rose’s Lime Juice with one-half ounce fresh lime juice.

Origins of the Gimlet

As with most prototypical mixed drinks, accounts of this cocktail’s genesis differ. The most compelling relates the story of how Sir Thomas Gimlette, a Royal Navy surgeon, first concocted it in the 1880s while persuading his shipmates to drink lime juice, to avert scurvy, with their gin allotment. Introduced just ten years prior, Lauchlin Rose’s lime juice syrup sweetened the deal, as it were, by maintaining the citrus component while also sweetening the drink.

Mixologically-speaking, this gin cocktail belongs to the sour family of mixed drinks, a sort of sweet gin rickey, minus the seltzer. Initially half gin and half lime cordial, the contemporary trend of drier aperitifs means the proportion of gin has gradually increased over the years.

If you ask any serious fan of cocktails for their advice on this, prepare yourself to get an earful. Most mixologists use gin unless vodka is expressly asked for, because a really smashing specimen relies on the proportion of the gin’s juniper to fresh lime: overdo the latter, the sourness is overpowering; an excess of the former, and it’s way too stiff.

As far as a gin enthusiast is concerned, using vodka is akin to ordering vanilla ice cream. Proponents of vodka, on the other hand, see gin more like rainbow sherbet: loud, colorful, overpowering. If you’re making a sundae, vanilla makes the best base.

Classic examples of this gin cocktail used to be prepared with Plymouth gin, a one-of-a-kind gin style specifically demanded in no less than two dozen Savoy Cocktail Book recipes. The British Royal Navy adored Plymouth gin so much that they ordered a stronger form that is known to this day as “Navy Strength.” Plymouth gin has been described as “earthy” as well as citrusy. Its flavor profile will come through, even in a sour.

Other prime candidates are dry London-style gins such as Tanqueray, Gordon’s, or Beefeater. Avoid more elegant or fragrant gins, such as Hendrick’s. Their delicacy will be lost on a sweet, fruity sour.

The Best Vodka (If You Insist)

Just like with the gin, you don’t need the top-shelf stuff like Grey Goose. It’s totally fine to use Smirnoff.

Traditionally, it’s not authentic if it doesn’t contain Lauchlin Rose’s original lime cordial, better known as Rose’s Lime Juice. It’s worth keeping in mind, though, that the Rose’s Lime Juice available today is pretty far from Rose Lauchlin’s original formula. The majority of craft cocktail bars disdain high-fructose corn syrup and other additives that have found their way in.

If you’re looking for a delicious, classy, elegant aperitif, look no further than this timeless cocktail. It won’t let you down. 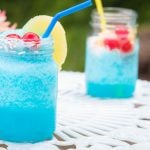