Often, the simplest cocktails are those that stand the test of time and turn out to be some of the very best, and they don’t come much simpler than the Black Russian. You only need two ingredients to make this vodka and coffee liqueur blend, but the result is simply spectacular; and there are a lot of fun ways to play around with the formula.

The History of the Black Russian

The world owes Luxembourg bartender Gustave Tops a great debt for inventing this classic cocktail. The story goes that Tops was working at the Metropole Hotel in the late 1940s, just around the beginning of the Cold War. The US Ambassador to Luxembourg at the time was none other than famed socialite Perle Mesta, well-known for her glamorous lifestyle and party-loving nature.

Mesta visited the Metropole one night, and Tops wanted to honor the occasion by crafting something new. He mixed together some vodka and coffee liqueur, presenting Mesta with his Russian-inspired blend. Over the years, the recipe was adapted and toyed with, leading to the creation of the White Russian in the 1960s and many other variants too.

How to Make – Recipe 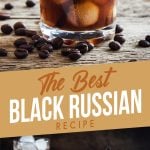 One of the best things about this cocktail is that it's so simple to make, and you won't need to shop around for any exotic ingredients or spend too much time on the preparation, either. The ingredients below will make enough to fill an old-fashioned glass, but you can adjust the amounts to suit other receptacles.
Keyword Black Russian, Cocktails, Vodka
Prep Time 3 minutes
Servings 1
Author My Bartender

How to Drink It

There are no strict rules when it comes to how you drink and enjoy cocktails, but this one tends to be best suited for evening drinking. It’s the sort of cocktail that people like to sip slowly, savoring the depth of the flavors and really feeling the intensity of the coffee and the smoothness of the vodka, and it’s a nice choice to relax with after a meal.

In terms of taste, this cocktail is dominated by the coffee flavor, but it all depends on how you measure out the ingredients. You can add more Kahlua (or other coffee liqueurs) to get a sweeter flavor or use additional vodka to get a dryer and stronger flavor.

As mentioned earlier, there are a few different ways you can adjust the original recipe of this cocktail, creating a wide range of associated drinks that might suit your personal tastes and preferences. A few examples are listed below:

If you’re the sort of person who loves coffee and cocktails in equal measure, this is clearly one of the very best options for you. 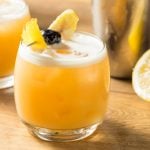