Whether it’s a summer barbecue or a comforting winter evening, flames fuel our get-togethers in more ways than one.

In the case of flaming cocktails, flames can refer to the literal fire radiating over the top of a shot glass or the spicy, warming sensation alcohol creates in your throat and stomach.

Below, I’ve compiled a list of flaming cocktails with theatrical presentations and fiery flavors that will impress any party. 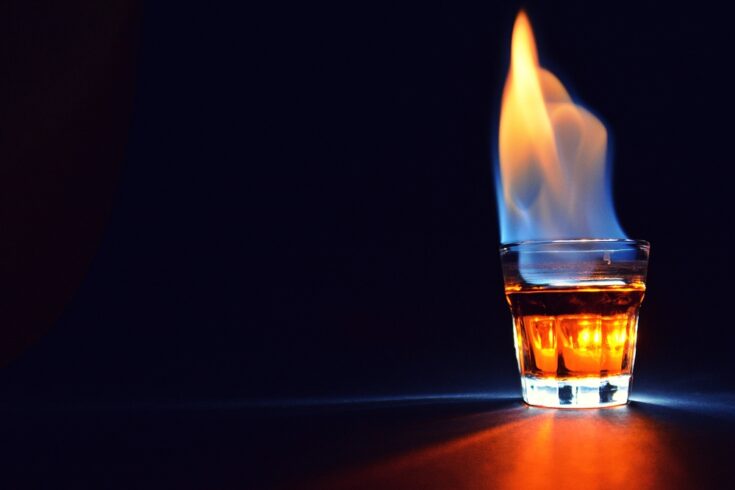 One of the most famous flaming shots of all time, Flaming Dr. Pepper shots originated in a Texas bar in the 1980s. Ironically, they don’t contain Dr. Pepper. Instead, these dangerously tasty shots contain beer, amaretto, and high-proof rum.

Each alcohol is a separate layer, starting with the beer foundation, followed by amaretto, and then topped with rum, which receives the flame and keeps it burning till you blow it out and swallow the shot! 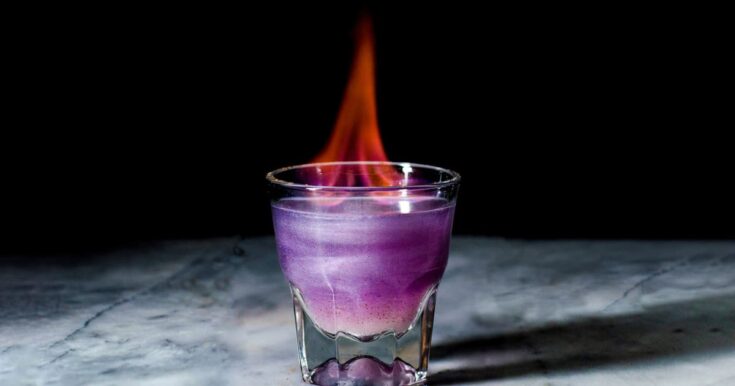 Not only is this a flaming cocktail, but it also changes color. It is another multi-alcohol shot that requires you to make the ingredients from scratch. The Lemon elderflower syrup is a metallic blue, consisting of vodka, elderflower syrup, and lemon juice.

The gin gets pearl luster dust and butterfly pea flowers to create a shimmering purple liquid. This is a great shot for Halloween parties, and it tastes delicious! 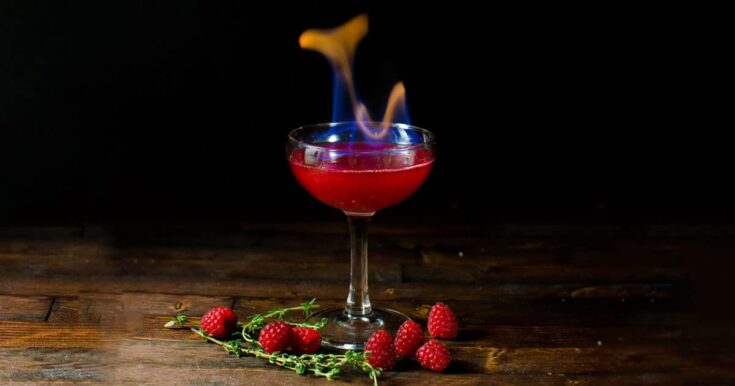 Named for its blood-red color, this flaming cocktail is another showstopping Halloween cocktail. Despite its menacing name, this cocktail is a delicious raspberry daiquiri using scratch-made raspberry thyme simple syrup to infuse white rum and lemon juice.

This recipe makes enough for six cocktails, but you can easily scale it up for a flaming rum punch bowl. 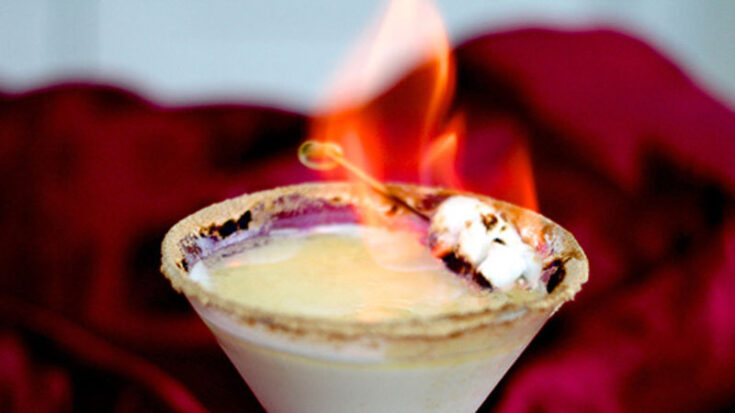 The martini glass rim is covered in a crushed graham cracker and cocoa powder mixture and three skewered marshmallows that roast over the 151 rum-fueled flames atop the martini mixture. 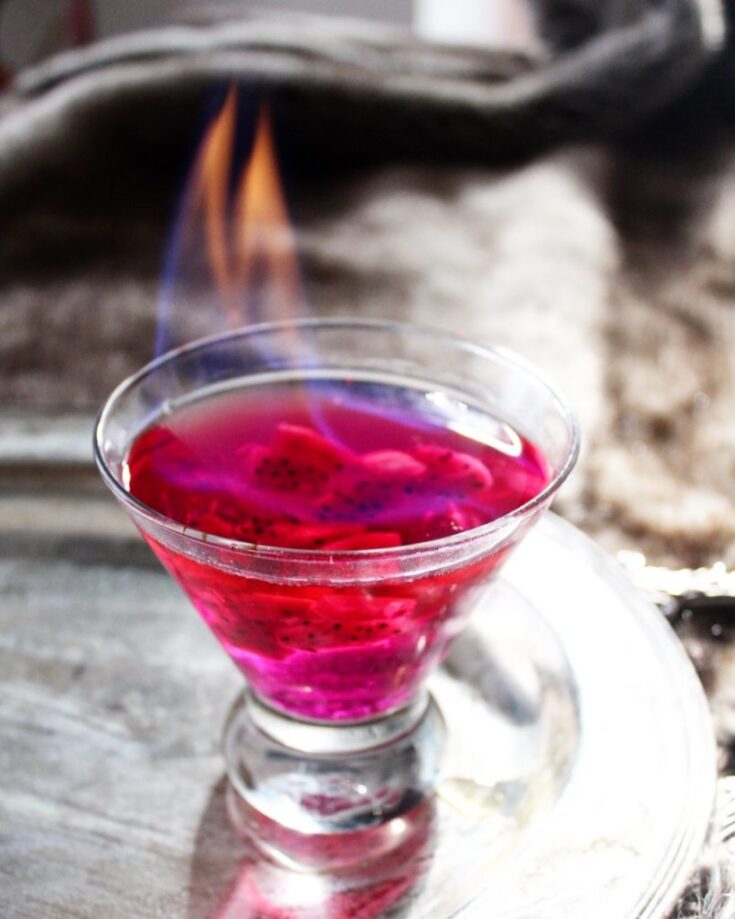 Inspired by the hit show, Game of Thrones, the Dracarys cocktail is a rum and dragonfruit cocktail with a flaming 151 floater.

This recipe has you infuse white rum with frozen dragon fruit cubes, turning the rum a deep pink and sweetening it. The lemon juice and St. Germaine add a floral and tart finish.

Another layered shot, this flaming B52 cocktail layers coffee liqueur, Irish cream, and Gran Marnier in equal parts in a tall shot glass. You essentially get a striped beverage that tastes like a shot of dessert.

A splash of 151 rum is all you need to top the shot off with a flame.

This elaborate flaming strawberry cocktail is worthy of professional mixologists’ praise. It starts with muddling fresh strawberries in a shaker with freshly squeezed lime juice, followed by a tropical trifecta of rum, crème de banana, and pineapple juice.

Instead of topping the entire cocktail with 151, this recipe has you place the flame inside a hollowed-out lime peel. 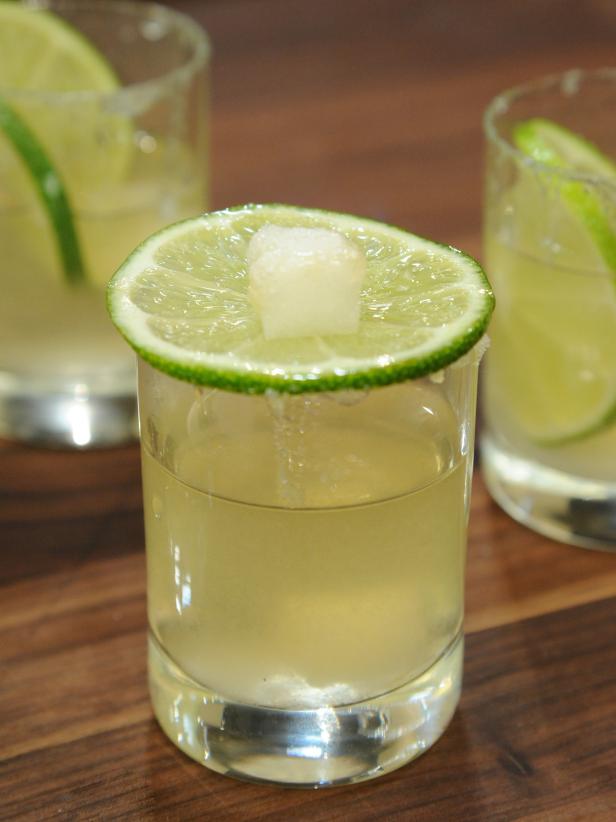 These flaming lime drops are essentially margarita shots. You make a classic margarita with lime juice, tequila, triple sec, and sugar in a shaker, straining the concoction into four shot glasses.

The flame to top these shots comes from an edible candle consisting of a lime slice base topped with a 151 rum-soaked sugar cube. 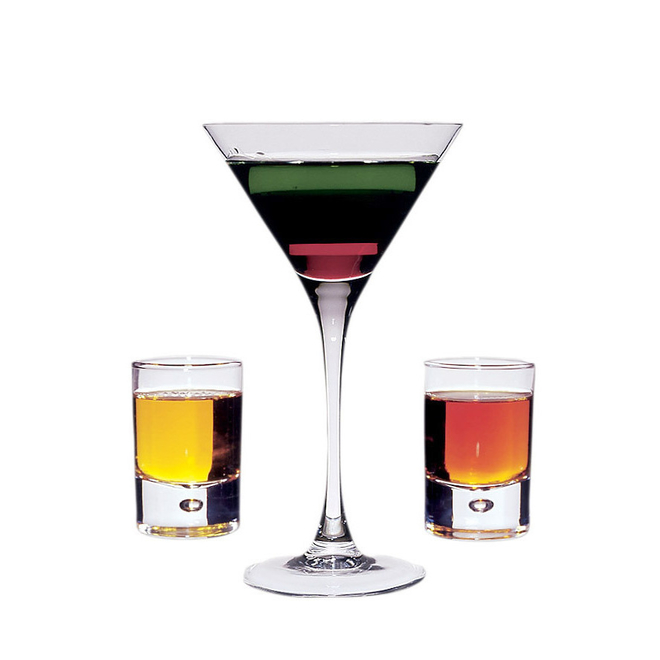 The first four shots are different colored liqueurs, with the rum and orange cognac in separate shot glasses. This drink requires a tag-team duo to suck down the first four ingredients through the flaming top while pouring the extra shots in. 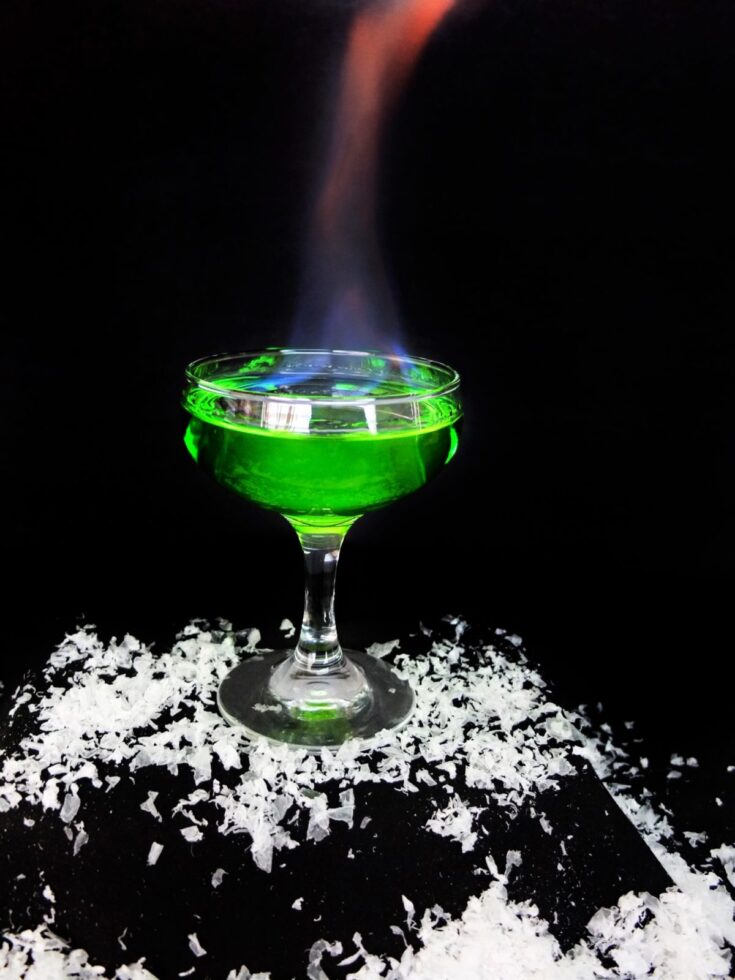 The 151 rum floater creates an almost blueish flame over these sweet, summery shots. This recipe makes one shot, but you can easily pour multiple shots for your Game of Thrones-watching party. 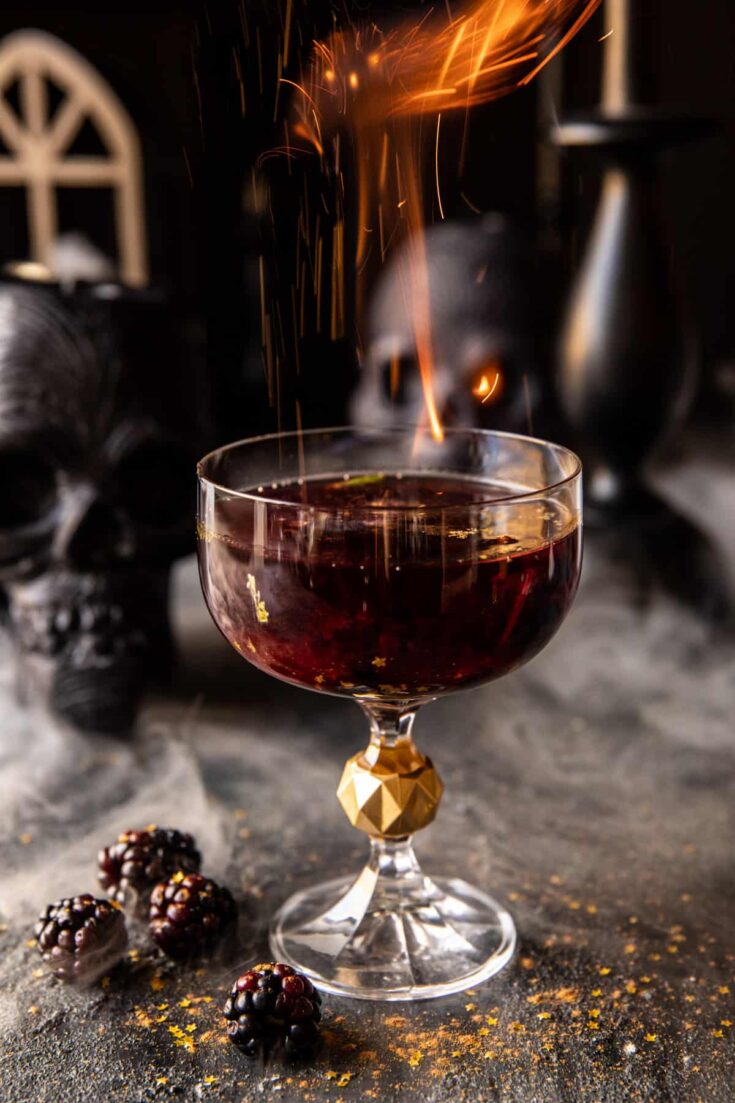 The Goblet of Fire

This regal-sounding cocktail draws inspiration from the Harry Potter movies. Even if you don’t have a goblet to serve them in, you’ll appreciate their delicious flavor and flaming top.

This gold rum cocktail has the perfect blend of fruit and bitters, muddling blackberries with honey, and a dash of bitters for a sophisticated summer cocktail. 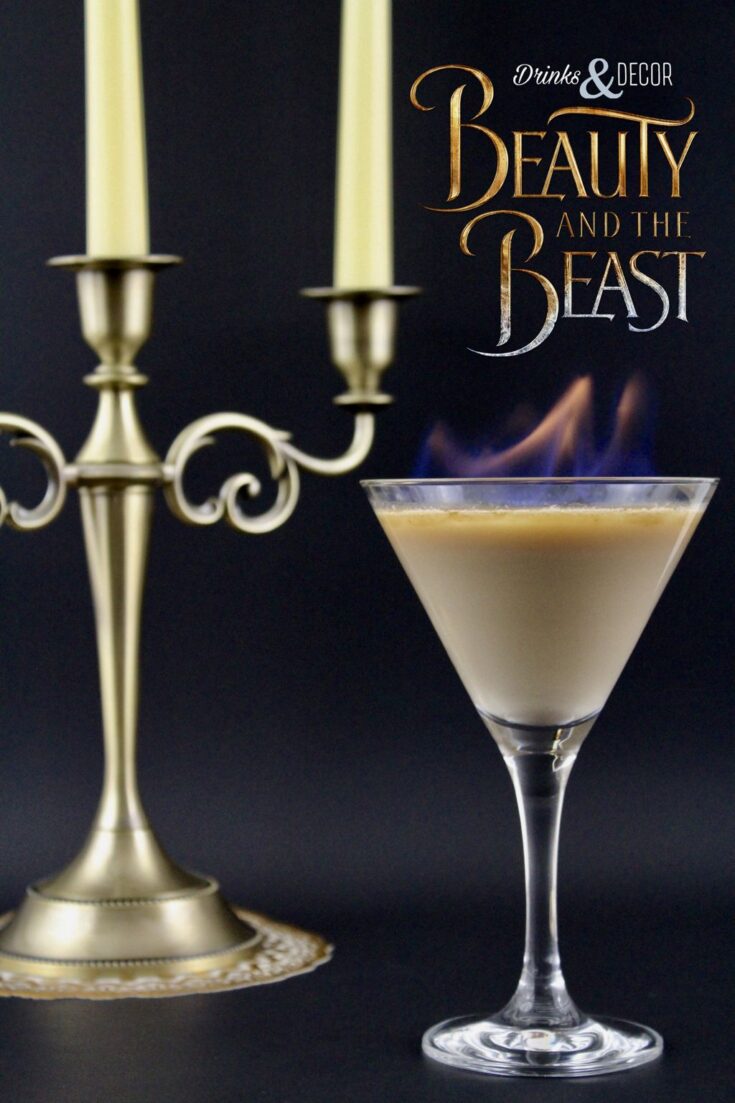 You can skip dessert with this sinfully sweet and creamy cocktail. Named for the three-pronged candle character in Beauty and the Beast, Lumiere’s Torch is a vanilla vodka martini with amaretto and equal parts vodka and Bailey’s Irish Cream.

The rum floater is a nice theatrical effect that gives credence to the cocktail’s name. 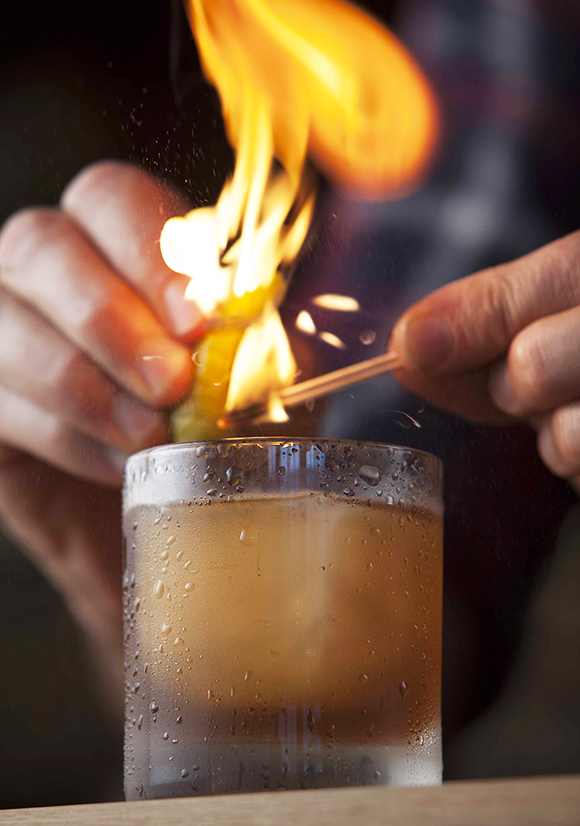 This elegant, wintery twist on the classic Old Fashioned blends rye whiskey with chocolate bitters and maple syrup in an Old Fashioned glass. It’s the perfect trifecta of smokey, bitter, and sweet.

The flame comes from a twisted orange peel garnish that you soak in 151 rum. 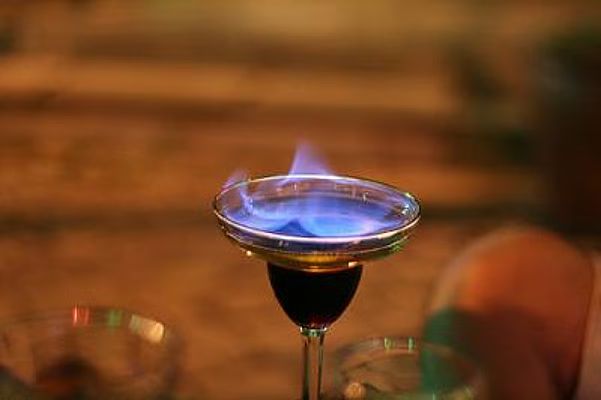 Another tag-team drinking experience, the Flaming Lamborghini assumes the same drinking format as a duo of drinkers who suck various flaming shots through a straw out of a martini glass.

The Flaming Lamborghini consists of sinfully sweet shots of Baileys, Blue Curacao, Sambuca, and Kahlua. This cocktail is not only a test of speed drinking but also of stomach strength. 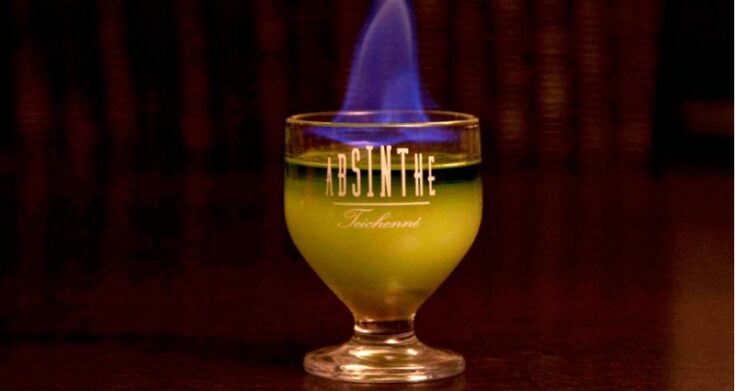 Absinthe is also known as the Green Fairy, so this cocktail shot gives you a double dose of the hallucinatory spirit. You get a shot of absinthe while also soaking sugar cubes in absinthe.

The Fiery sugar cubes gently drop into the shot of absinthe with a splash of cold water. The flame creates whimsical green flares. 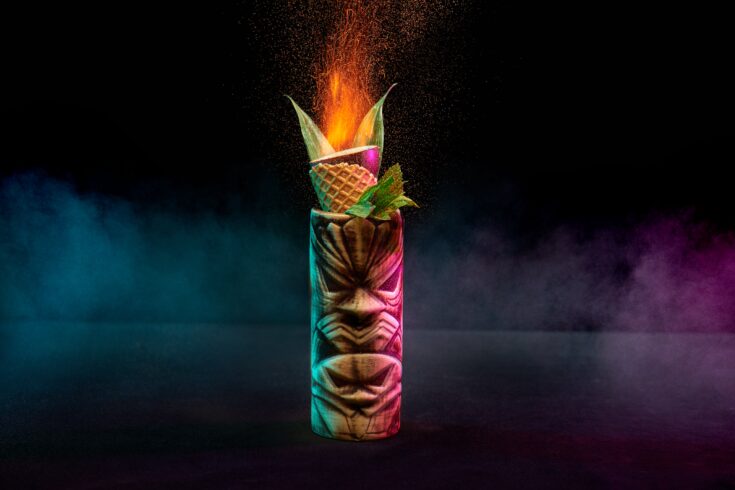 A perfect cocktail for a Tiki party or other tropical shindig, the Flaming Hot Zombie is a fruity, spicy rum cocktail. It blends golden rum with passion fruit puree, chili liqueur, pineapple juice, and a rich syrupy sweetener.

The golden rum has a complex flavor that blends perfectly with the sweet and spicy kick of the liqueurs and juices. 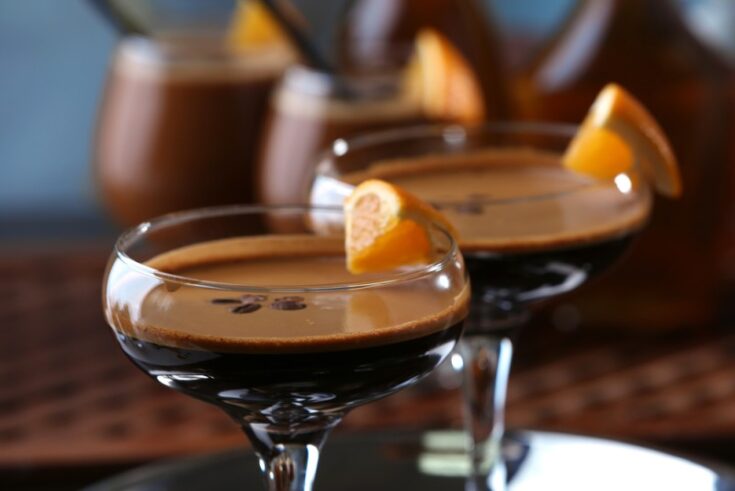 This comforting and rich cocktail would be the perfect nightcap or brunch drink. It combines coffee and orange flavors, using coffee liqueur and triple sec. It’s essentially a spiked cold brew coffee cocktail with a flaming floater.

The combination of coffee and orange is a wonderfully fragrant duo. 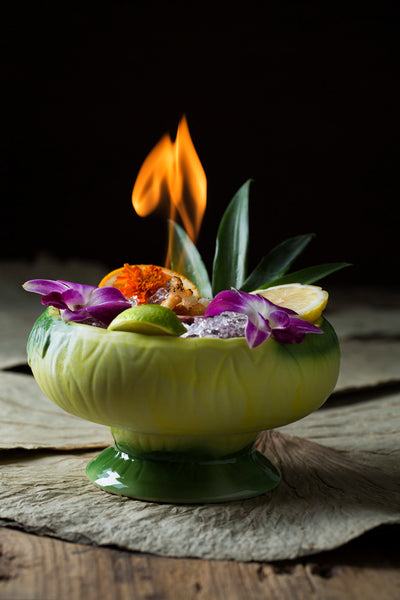 The ultimate Tiki-style rum punch bowl, the Volcano Bowl is a fiery rum inferno with Gold, Aged, and spiced rum. The alcohol blends with a fruity concoction of grapefruit and lime infused with Tiki spices and honey.

Tiki spices are a spice-infused simple syrup with allspice and vanilla notes. 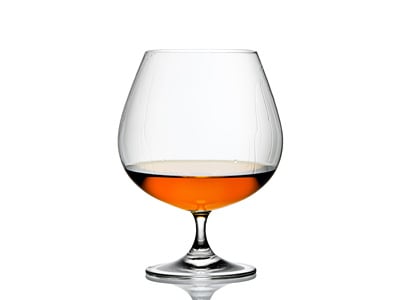 Named for the 1980s blockbuster, Backdraft is a flaming sambuca shot consisting of equal parts Drambuie and Grand Marnier. It tastes like a cinnamon fireball.

The high-proof rum creates the flame, which drinkers will snuff out with their hands, leaving a solid seal over the cocktail.  You slide a straw through the seal, sucking the shot and residual vapors. 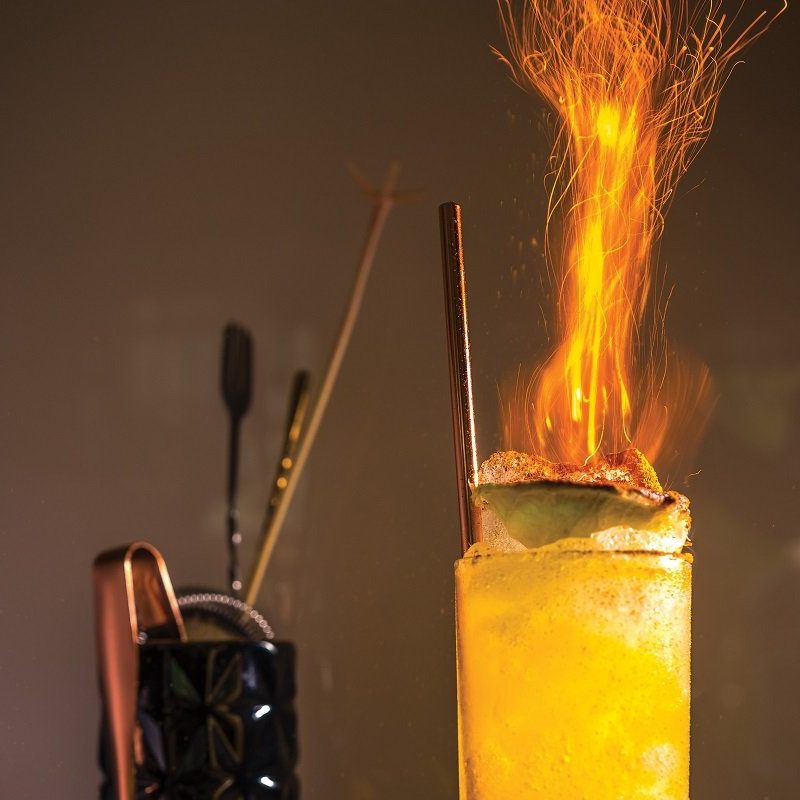 Another impressive, flaming take on a classic Tiki drink, the S.O.S. Mai Tai is a tropical rum cocktail that uses Jamaican rum and white rum mixed with lime juice and orange Curacao.

You serve the Mai Tai in a high ball glass, topping the cocktail with a flaming lime shell.

If you’re looking for a show-stopping cocktail, my list of flaming cocktails will impress eyes and taste buds alike. Most of these cocktails are highly alcoholic shots that will fuel any party.

I’d love to hear which flaming cocktail lit the biggest fire in your belly in the comments section below. 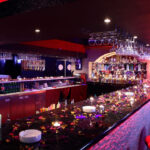 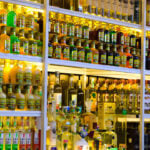