The Hurricane is a classic drink that’s as refreshing as it is gorgeous to look at. Who invented it? How do you make it? We cover all that and more below.

If you ask anyone from New Orleans, there’s no question: this drink comes from Pat O’Brien’s, a renowned Big Easy pub that’s been around since the days of Prohibition. Originally a speakeasy, O’Brien’s named this cocktail to fit the context. The password to get into O’Brien’s during Prohibition was “Storm’s a Brewin'”.

According to the legend, the owner of the bar had a lot of rum on hand, which for various reasons had fallen out of popularity at the time. It was hard to get your hands on bourbon and Scotch, but rum was plentiful to the point that huge barges full of it were growing barnacles at the Port of New Orleans. To get the rum out the door, the bar’s owner started mixing it with fruit juices, and, happily, hit on a classic.

Credit Where Credit Is Due

Who exactly came up with the recipe? Some stories credit the owner, Pat O’Brien, while others credit his partner Charlie Cantrell. There are even some who insist it was their head bartender, Louis Culligan. However, don’t count out New York City. At the 1939 New York’s Fair in Queens, a very close version of this cocktail was served at the Hurricane Bar, which could also be where the drink got its name.

Whoever actually came up with it–and we leave room for the possibility that it was invented independently in different places by different people–the first time the recipe was actually published was in 1956. Louis Culligan submitted it, and it ran in Cabaret magazine. 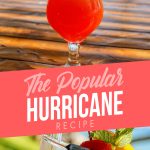 When the cocktail became wildly popular, Pat O’Brien’s began developing a pre-mixed version that let them get it out the door in bulk. The new recipe made the drink even more popular, for two reasons. First, it was a lot redder, and was thus appealing as a cool-looking cocktail. Second, it was a lot sweeter, which means it’s easy to drink, and by the time you realize how much you’ve imbibed, you’re finding it harder to make good decisions and put your hand over that glass!

To taste the pre-mixed version in a single serving, you’ll need:

Shake these together, strain, and add to a glass filled with ice. Popular garnishes include an orange slice and a cherry.

If you ever go to New Orleans, you can get this cocktail from Pat O’Brien’s directly. In fact, they’ll even let you keep the glass a souvenir! 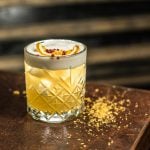 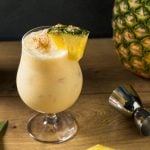