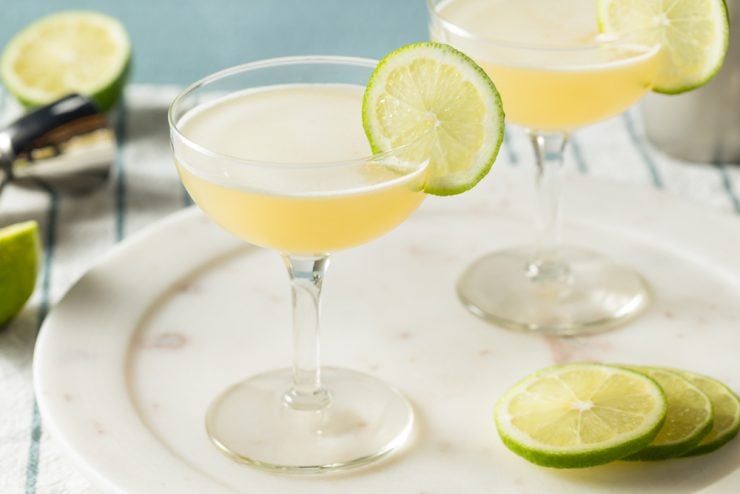 Traditionally, a Gimlet is made with gin. The gin is what gives this classy and sophisticated cocktail its deliciously understated botanical flavor. However, sometimes you need just a bit more kick to your cocktail: enter the Vodka Gimlet. You can think of this cocktail as the traditional Gimlet’s dark-sided (yet undeniably enticing) twin. However, any good Gimlet made with vodka instead of gin should also have two other crucial characteristics: it must be strong and icy cold.

Some believe that a surgeon named Sir Thomas Gimlette first served this drink to sailors as a clever way to prevent scurvy, which was a significant problem for sailors back in those days. The sailors wouldn’t drink the bitter lime juice unless it was mixed with liquor. Go figure!

Others believe it was named after a tool called a “gimlet,” which was used to drill holes in ships, so the name pays homage to the drink’s “piercing effect.” The traditional Gimlet ingredient of gin wasn’t replaced with vodka until the 1970s and ’80s. Though many people choose classic gin when they drink a Gimlet, swapping it out for vodka makes for a tangy and balanced cocktail with a smooth, sumptuous flavor.

If you’re making a Vodka Gimlet at home, the only way to do so properly is by using icy cold vodka. The best way to accomplish this is by popping your bottle right into the freezer to let it get nice and chilly. Do this before making your Gimlet, so you can be sure the drink is an icy smooth treat going down.

While some use lime cordial, any cocktail buff or bartender will tell you that fresh-squeezed lime juice is the way to go. You will also need simple syrup as well. By using fresh juice instead of cordial, you can attain a balanced and super smooth flavor profile.

This cocktail couldn’t be easier to make, another reason it’s remained so popular through the years. It’s delicious, straightforward, and offers a truly fantastic taste. Plus, you’ll never have to worry about scurvy again!

The Gimlet may have been around for a while, but this cocktail remains as popular as ever. While the traditional alcohol in a Gimlet is gin, swapping that out for chilled vodka makes for a deliciously modern twist. Try it out next time you’re at the bar or making a cocktail at home, and you’ll be surprised how smooth and balanced it is. It may just become your new favorite cocktail!