The bamboo is a classic cocktail with a sherry base. In this article, we’ll give you some background on this drink and then tell you all you need to know to make it for yourself.

How to Make a Bamboo

Here are the directions for making a bamboo cocktail!

What is a Bamboo Cocktail

The bamboo cocktail is a unique drink for one particular reason. Unlike other classic cocktails, the bamboo does not have a traditional spirit as its base. Instead, it uses sherry.

Many cocktails rely on hard alcohols such as whiskey, vodka, and gin. In the case of the bamboo, the sherry base is not a spirit at all.

History of the Bamboo Cocktail

It is difficult to pin down the exact origin of the bamboo cocktail. But as its name suggests, its creation is likely the result of Asian culture.

The most likely story is that the bamboo first came into existence in Yokohama, Japan. A German bartender living there named Louis Eppinger would serve this cocktail at the Grand Hotel where he worked.

Eppinger may or may not have been the first to make the bamboo cocktail. But regardless, he did a lot to help popularize it.

Before living in Japan, Eppinger was already a well-known bartender in the San Francisco area. There he built a reputation as a cocktail aficionado.

Later on, he took up the task of moving to Japan to help spread American cocktail culture to the rest of the world. Part of that effort included serving the bamboo in the Grand Hotel.

However, there is another conflicting origin story for the bamboo cocktail. This one claims that a famous song called Under the Bamboo Tree, by Bob Cole, was the inspiration for the cocktail.

But, there is one issue with that background. The song by Cole came out in 1902. Two years earlier, the drink was already popular enough to be sold in a bottle in some regions.

Regardless of the exact explanation of the bamboo cocktail’s existence, it likely dates back to the late 1800s. Some references mention the year 1886 as the starting point.

This is a fantastic after-dinner cocktail or just a light, refreshing drink when you’re feeling parched.

Go ahead and mix one up and tell us what you think in the comments below! 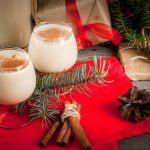 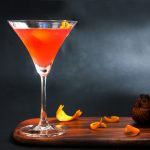