Root beer is an iconic North American beverage. Unknown to some people, root beer is also an excellent mixer for whiskey. And what better way of making a classic highball cocktail than mixing root beer and bourbon?

Root beer deserves its place among cocktail elixirs like ginger ale, 7-Up, and Coke.

How to Make Bourbon Root Beer

1. Fill a Collins glass with ice (the ice is optional).
2. Add the bourbon to the glass.
3. Top up with root beer.
4. Stir gently to mix the two ingredients. Use a bar spoon or tumble in a mixer.
5. Serve with a straw.

Root beer’s history can be traced to the 18th century, when American farm brewers made non-alcoholic drinks for their families. Such beers were referred to as small beer and were made from herbs, roots, and barks. Root beer was prepared from sassafras root. The alcohol content in early root beer was 2%.

In 1876, Charles Hires commercialized root beer, and by 1893, production was in full throttle. Proponents of this beer espoused its medicinal benefits, and this propelled its ascendancy.

It wasn’t until 1907 that bartenders started mixing whiskey with other drinks. Bourbon was first mixed with Coca-Cola as a way of introducing novice drinkers to whiskey.

At that time, the most popular blend among teens and young men was Jack Daniels and Coke. However, the mixture was frowned upon by upmarket establishments.

Bartenders began experimenting with diverse mixtures to please everyone’s taste. It’s through such experiments that the potential of root beer was unearthed.

Craft root beer comes in a variety of flavors like mint, cherry, nutmeg, cinnamon, eucalyptus, to name a few. The final choice depends on your tastes.

You can rely on craft root beer or go the traditional way. If you choose the latter, grab a pestle and mortar and prepare root beer syrup from sassafras roots. Whatever you do, ensure the root beer and bourbon are of high caliber.

Most bartenders opt for craft root beer as it offers many flavors.

Bourbon root beer is an easygoing drink. You can enjoy it by the poolside, in outdoor get-togethers, and even at night parties. The non-alcoholic root beer will hydrate you, while the bourbon portion will provide that tipsy feeling. If you have a guest that doesn’t enjoy alcohol, serve them root beer only. 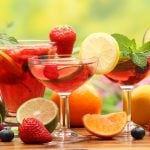