Though widely recognized as a classic in the world of bartending today, the cable car actually isn’t that old of a drink.

However, it took off immediately and has been found on menus around the country ever since.

How to Make a Cable Car

While there are other variations of the cable car, we’re going to stick to the basics on this one with these ingredients and methods.

Unlike many other cocktails, we actually do know the history behind how the cable car was created. Bartender Tony Abou-Ganim is credited with inventing this cocktail in 1996. A modern interpretation of the Sidecar cocktail, Abou-Ganim sought to revamp the drink with a new twist that would make it an instant classic.

The goal was not only to showcase the bold flavor of spiced rum but to also pay homage to the city in which it was created: San Francisco.

In the 90s, it wasn’t so common for bartenders to create specialty cocktails. Most menus stuck to the basics, and you never saw an original creation dawn their pages. So when Abou-Ganim made this drink, he was up to the challenge of breathing new life into a tired, forgotten cocktail.

Many who were around at that time credited the drink’s major success to the simple yet genius pairing of spiced rum with cinnamon sugar. It was a flavor that no one could resist, yet the cocktail looked classic enough for serious drinkers. Plus, it reached a far wider audience than straight brandy or whiskey did.

It wasn’t long before other restaurants were putting the cable car on their menus. Many restaurants even claimed it was their most popular drink, and more companies started producing their own brands of rum to monetize on the demand.

For more of a garnish, you can also add an orange wedge to the rim of the glass and top the drink with a whole cinnamon stick. 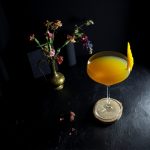 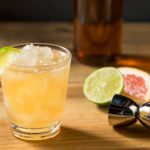