Who is Tom Collins, and how did he get a cocktail named after him? More importantly, how do we make this delicious cocktail? Let’s get into it.

Oddly enough, the history of this drink goes back to a man named John Collins: not Tom. John was head waiter at a place called Limmer’s Old House back in the 1860s, and he’s credited for inventing the basis for this drink using Old Tom gin (hence the name change from “John” to “Tom”). However, that’s not the end of the story.

Collins is a pretty common name, and back in the 1870s, much of the USA was involved in a little practical joke they thought was simply hilarious. People–average people, politicians, music composers, journalists–were running around telling others that someone named Tom (you guessed it) Collins was talking smack about them behind their backs.

Journalists in particular actually had a minor competition going to see who could wind up their friends the for the longest, convincing them to believe in this mysterious new personal enemy: Collins. The cocktail came to prominence at the same time as the practical joke, so it’s hard to believe they weren’t related. Most likely, the practical joke highlighted the name and gave the drink a special prominence in people’s thinking.

The traditional Collins isn’t as sweet as the one we drink today, and that’s because of another twist in the story from 1882. In that year, another bartender named Harry Johnson made two Collins drinks. They were essentially the same, using either Old Tom gin or a new and popular Dutch gin called Jenever. 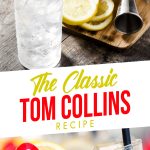 You should know that the original Old Tom isn’t available anymore. Old Tom fell in the middle of the gin flavors: not as botanical as most modern gins, but not as malty as the Jenever. Unfortunately for Collins fans, Prohibition killed off America’s taste for this gin, and it was replaced by London Dry.

Today, you can find variations of it from a number of distilleries. Perhaps the most popular are those from Hayman Distillers and Ransom. Ransom’s is a bit maltier, but less sweet and with fewer botanicals. Hayman’s is clear, sweeter, and has a very juniper nose.

Unfortunately, you probably can’t get something exactly like the original Old Tom’s, but you can get pretty close. And the point isn’t to rehash the past but to enjoy the present. Choose thy love and love thy choice: you can make a great Collins with whatever gin tickles your fancy.

The Collins is a classic: why not make it yours? 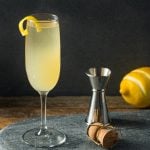 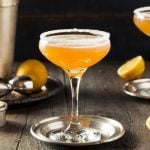