If you like Sidecars, you’ll love its rum-based relative, Between the Sheets. It’s served in a Coupe glass so it looks classy and tastes smooth.

History of the Between the Sheets Cocktail

Harry’s New York Bar was a trendy place to get cocktails in the 1920s and 1930s. Despite its name, the bar was actually in France. The original owner, Tod Sloan, had a bar in Manhattan that he took apart and shipped to Paris.

Bartender Harry MacElhone was hired to run the place, originally just called “New York Bar.” When MacElhone bought the bar from Sloan, he put his name on it and began experimenting with cocktail recipes.

The drink is made from equal parts rum, triple sec, and cognac. Adding a bit of lemon juice gives the drink a tartness that makes the other flavors more potent. If you like the citrus the lemon adds, you might also choose to garnish with an orange peel.

As always, using quality ingredients will ensure the best tasting drink. That is especially key for Between the Sheets since you’re mixing two spirits. Top-notch cognac will add a rich, fruity flavor that blends nicely with the tropical taste of the light rum.

Fresh lemon juice is key to this cocktail. Using bottled juice might overpower your drink and make it too sour.

If you liked Between the Sheets, consider getting the ingredients to try its relatives, the Sidecar and the Maiden’s Prayer. Taste-testing the three slightly different cocktails is a great way to discern how different spirits work together.

A Sidecar uses cognac, orange liqueur, and fresh lemon juice. The key to this drink is its sugared rim. It’s an optional garnish, but the hint of sweetness adds a depth of flavor to the otherwise dry cocktail. 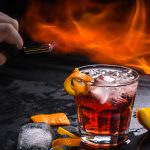