Despite being one of the most popular and widely-consumed alcoholic beverages of them all, beer is often overlooked in the cocktail world in favor of wines and liquors. Still, beer lovers can find some terrific cocktails to try, and the boilermaker is most certainly one of them, blending beer with a shot of whiskey for a unique taste experience that can be enjoyed in a lot of different ways.

History of the Boilermaker

The precise origin story of this beer cocktail is unclear. Some stories suggest that it originated in Butte, Montana, back in the late 19th century and was served to local miners at the end of the working day. Other stories suggest that the drink was around earlier in the 1800s, enjoyed by factory workers, perhaps even named in honor of those who worked on the construction of boilers for steam locomotives.

Of course, given the universal popularity of beer and whiskey, it’s likely that some form of this drink had been enjoyed well before either of those stories. In any case, the drink is a popular one, serving as a good entry point for those taking an interest in beer cocktails, and famed for its versatility, as there are no strict rules in terms of which ingredients you use or even how you drink it.

As stated above, the recipe for this mixture isn’t really set in stone. All you need is a shot of whiskey and a glass of beer. The types of whiskey and beer you use are totally up to you, and that’s a big part of the fun of this particular cocktail; you can make it in a million different ways.

You can even choose to pour the whiskey into a beer bottle directly, after drinking a little of the beer, or you can gulp the whiskey like a regular shot and chase it with the beer. The choice is yours, and you can choose from a lot of different beers and whiskeys too. Rye and bourbon are the most common options for the whiskey, but you can play around with other options and try lots of beer varieties too from pilsner to stout.

This is one of the most versatile cocktails of them all. Not only can you experiment with different beers and whiskeys, but you can also switch up the formula to try different liquors instead of whiskey. An Irish Car Bomb cocktail, for example, involves blending a shot of Irish cream with a glass of stout, while the Korean Somaek cocktail involves mixing beer with soju and a U-Boot is made with beer and vodka.

This cocktail is a perfect example of two very different drinks blending surprisingly well together. If you’re a whiskey-lover, a beer-lover, or someone who loves them both, be sure to give it a try. 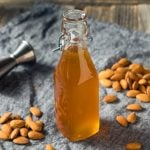