If you’re looking for a cool, potent drink that reminds your guests of their favorite childhood memories, you can’t do better than the Flaming Dr. Pepper shot. Although it doesn’t contain any Dr. Pepper, this drink tastes just like the sweet soda due to the mix of liquor, amaretto, and beer. With its cool pyrotechnic effect, you won’t find a more fun and popular option for your party.

The famous drink was first created in the 1980s, but there are two separate origin stories available. Both the Gold Mine Saloon in New Orleans and the Ptarmigan Club in Bryan, Texas state that it originated in their locale. Although it’s almost impossible to believe that such a specific drink could be created in two separate instances, this could be the case.

This drink only requires three ingredients: beer, amaretto, and overproof rum. To create the desired bright flame, you need to find a potent liquor, such as 151 rum. Unfortunately, Bacardi discontinued their version of it because they got sued by people who had accidents while creating this or similar drinks, so you’ll have to look elsewhere. And remember to always be safe, especially if you’re mixing drinking and fire.

Depending on the type of beer you use, the shot will taste more like Dr. Pepper or root beer. Before you serve to your guests, experiment with different flavors to see which one you like best. In terms of the amaretto, Disaranno is always a tasty option.

To create a delicious and potent Dr. Pepper shot, follow this recipe, brought to you by the well-known bartender Simon Ford. The ingredients are both delicious and easy to find.

Aside from the ingredients listed above, you’ll need both a pub glass and a shot glass, a lighter, and ideally a fire extinguisher, just in case. It’s best to use a fireproof surface such as a stone table when making this drink, as you want to avoid any accidents that could ruin your party. If you’re concerned, you can omit the fire part and serve the drink cold. Once you’ve collected all the necessary tools, there are only four steps to creating the perfect Dr. Pepper shot.

As a cool and exciting party drink, this Dr. Pepper shot will delight your guests. While many people opt to light it on fire, this isn’t imperative and some even prefer the cooler taste of an unlit drink. No matter how you decide to serve it, it’s sure to be a hit with its delicious taste that reminds everyone of their favorite childhood drink. 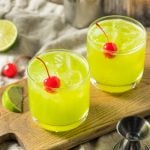 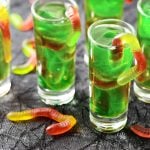