The Scofflaw sounds exactly like the sort of drink that was enjoyed during Prohibition. The world was ready for a contest held by arch-Prohibitionist Delcevare King. On January 15, 1924 he put on a competition for people to come up with a word to describe criminal drinkers.

He wanted something that would “stab awake the conscience”. However, this drink was not born during this particular era, despite the allure of its naughty name!

How to Make a Scofflaw Drink

History of the Scofflaw Cocktail

If you want to drink something that was popular and authentic during Prohibition when you next visit your favorite speakeasy-style bar, you might have a bit of a surprise. People think that amazing cocktails were invented during the Noble Experiment to mask the taste of poorly made bootleg booze.

But this isn’t really the case. In a real speakeasy, you would probably have the choice of a Ginger Ale Highball or sparkling Champagne and not a lot else! Illegal drinking didn’t quite have the romance that we would like to think.

Although this drink was invented at the time of Prohibition, it wasn’t produced in some dark hideaway under the Chicago streets. It was actually created at Harry’s New York Bar, a famed drinking spot in Paris.

Variations on a Theme

The only real drink recipe that was actually developed in the United States while alcohol was outlawed is the French 75, or so says David Wondrich, a well-respected historian of drinks. That was a simple mixture, made most often with gin and Champagne mixed with lemon juice and sugar.

Other variations exist, but this classic reflects the paucity of choice of drinks at the time. Not that good Champagne is anything to be sniffed at!

Our drink is originally made with a third of rye whiskey, a third of French vermouth, and a sixth each of grenadine and lemon juice. The flavor was a little one dimensional though, so we’ve jazzed it up a little.

This gives our recipe a bit more of a kick and more complexity by adding more interesting aromas. Try both versions and see which one you prefer, then experiment with bourbon that has been aged in casks for a few years to add more depth to the finished drink.

Use the best quality ingredients you can find for the best results – try Sfusato lemons from Italy’s famous Amalfi Coast for a softer, slightly sweeter, and more perfumed finish to your cocktail. 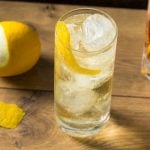 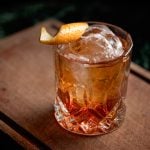