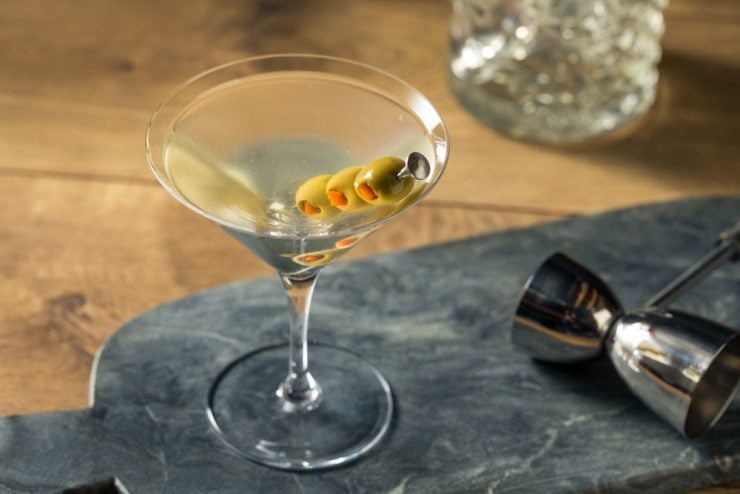 My Bartender > Vodka > The Dirty Martini

There is something remarkable about a cocktail that can hold its place at the top in spite of so many other intricate drinks that have trended over the years. First introduced on the bar scene in the mid-1800s, the Martini continues to bring a sophisticated flair to anyone who is seen enjoying one. It is a drink that has been played with over time, which has inspired variations like the Dirty Martini, the drink that comes with its own snack.

You might think that it would be easy to trace the Martini back to its origins, but as is the case with many drinks dating back to the 1800s, evidence is conflicting. As one story tells, it was made especially for a miner who had wanted to celebrate his good fortune after finding gold in a town called Martinez. Others credit Jerry Thomas, “the father of American mixology”, who served them for travelers on their way to Martinez from San Francisco.

Another account that has stuck is that the drink was born from the actual brand Martini and Rossi, which was the vermouth used in the original recipe, and something that the guest would call for when ordering a “martini and gin”. They all make for good stories, and there is no denying that no matter how this drink came into being, it represents American cocktail culture like no other.

The original Martini was a bit different from the ones that are sipped on today. Gin, the preferred base spirit, was combined with sweet vermouth until dry vermouth stepped in and took over. The ratio of vermouth to gin was 50:50, and a few drops of orange bitters were added to enhance the flavor. The original recipe would be unrecognizable to anyone looking for their usual dry Martini in a bar today.

The name that started it all has evolved to include anything served in a triangular cocktail glass. In order to accommodate drinkers who want to sip their afternoon libations “straight-up” sans the boozy taste, bartenders became inspired to start adding tini to all types of concoctions, whether fruity, botanical, or caffeinated. The adaptation with olive juice is very popular today, but it took a while to become a crowd-pleaser.

The dirty version came into being in 1901, created by New York bartender John O’Conner. It was made by muddling an olive into the drink before adding the brine. It was decades before this salty sipper took off, but after rumors of President FDR serving them in the White House, they started to catch on.

Gin started taking the backseat when vodka became popular in the 1970s, and these days most people expect their Martini to be served with the less botanical, smoother spirit. No matter what your preference, olive juice does it justice. The bonus is the olive to snack on, and with so many variations of olives, such as blue cheese, almond, or jalapeño stuffed, ordering your cocktail “dirty” never gets boring.

It can be hard to serve enough olives to keep up with all the dirty drinks that leave the bar. If your new favorite evening sipper requires a briny base, and you are having the same problem at home, not to worry. You can avoid having a fridge full of jars of olives by purchase the juice separately from companies like Dirty Sue or Boscoli.

Combine gin or vodka, dry vermouth, and olive juice in an ice-filled mixing glass. Stir continuously until chilled. Strain into a cold cocktail glass. Skewer the olives and add to the drink.

This drink is quite easy to make at home and is sure to satisfy any salt cravings, with a garnish that will tide you over until dinner is ready.