The fizz family of cocktails is well known in the mixed drink world, featuring an unmistakable mix of a spirit with citrus, sparkling water, and sugar. Maybe you think that combination sounds like a sour, but with the addition of soda. In that case, you’d be right! Both drinks often contain raw egg white, too. However, a Gin Fizz is unique and contains smooth botanical notes of gin that really make the flavor pop in this cocktail.

Brief History of the Gin Fizz

The first printed reference to the fizz family of drinks was in the 1887 edition of The Bartender’s Guide by Jerry Thomas, which actually contained six different recipes for these frothy cocktails. They’re a specialty of New Orleans, where it was so insanely popular that teams of bartenders had to be hired to shake the drinks in turn. This drink is also an international delight, as it was even included in the French cookbook L’Art Culinaire Français, published in 1950.

In the first couple of decades of the 1900s, fizzes rose steadily in popularity among cocktail connoisseurs. However, one of the most notorious is the Ramos Gin Fizz, well known for its components of orange flower water and heavy cream, making it reminiscent of a creamsicle. This dreamy and creamy cocktail was invented in New Orleans and remains popular today as a luxe and trendy take on the original recipe.

Try All the Fizz Variations

Fizz cocktails have a wide variety of recipes. However, tasting the original version will make you appreciate all the variations that much more. No matter what kind of fizz you’re making, the foundation should always be a superior-quality gin. Since it’s the only spirit, it provides a sturdy base upon which the rest of the flavors weave a beautiful tapestry on your tastebuds. So, compromise elsewhere—this is no time to be stingy.

For a thicker consistency, try shaking the cocktail without ice first. This is called dry-shaking, which helps the liquids seamlessly integrate with the egg white for a smoothly blended cocktail. Then, add ice and shake again until the entire mixture is chilled. Strain and pour the contents into the glass for a luxuriously layered aesthetic.

The fizz family of cocktails has multiple different variations. However, some of the most popular include:

The entire fizz family of drinks has remained very trendy in the U.S. since the beginning of the 1900s. Featuring high-end gin, lemon juice, egg white, and simple syrup, this fizz recipe makes a creamy and delicious mixed drink unlike any other. However, any fizz cocktail is sure to taste incredible, whether it’s made from egg whites, egg yolks, or even creme de menthe. Try this cocktail for a fun, frothy, and creamy experience next time you’re at the bar! 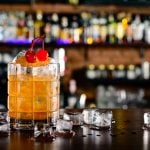