Sweetness, spice, and everything nice — that’s what ginger syrup is made of!

Ginger has been used in cooking and traditional medicine for thousands of years, and ginger syrup has recently emerged as one of the hottest additions to spice up your favorite cocktail.

Ginger syrup adds complexity, warmth, and a touch of heat and sweetness to any drink.

The use of ginger root in food, drinks, and medicines dates back over 5,000 years in Asia, primarily India and China, where it is still widely used today. When trade between nations and continents began, ginger was a hot and valuable commodity.

It was popular during the Roman Empire and made a comeback in Europe thanks to Marco Polo’s expeditions. After that, it became one of the most traded spices globally. Ginger came to the USA in the 15th century and has been a desirable product worldwide ever since.

The history of most libations is a little foggy (understandably so!). But there are reasons to believe that the word cocktail came from a rather cheeky reference to an intensely flavored spicy drink that made you snap to attention. In England, these drinks would have featured ginger.

The Moscow Mule, a famous ginger-based 20th-century drink still ordered in signature copper cups today, did not originate in Russia as the name implies, but New York City in 1941. The simple combination of vodka, ginger syrup (or ginger ale), and lime juice was responsible for vodka’s rise to popularity in the USA.

Arguably, the most famous 21st-century example of a popular craft cocktail where ginger takes a starring role is the Penicillin. The drink was created by Sam Ross in the early 2000s when he was bartending at the Milk & Honey Bar in New York City.

The Penicillin takes elements of a Whiskey Sour and spices it up with ginger. Scotch, lemon, and ginger syrup blend and create a delightful complexity of complementary flavors. It is a classic and classy cocktail for the modern connoisseur with a discerning taste.

The ingredients in ginger syrup are simple, and the process of making it yourself is pretty straightforward. The essential elements are:

Epicurious and The Spruce Eats offer a simple step-by-step method. Some recipes like one from New York Times Cooking call for optional lemon zest and one small dried hot pepper to add additional tang and heat. Vanilla is used as a flavoring, especially for sweeter beverages.

All recipes require the ginger to be sliced very thin, and the sugar needs to be very fine, not coarse. You can also adjust the sugar ratio and use alternative sweeteners to cut calories.

There are dozens of excellent ginger syrups on the market for those who want to skip the hassle of cutting, cooking, and cooling.

The two most famous ginger syrup cocktails are the Moscow Mule and the Penicillin. 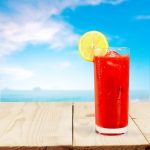 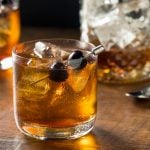