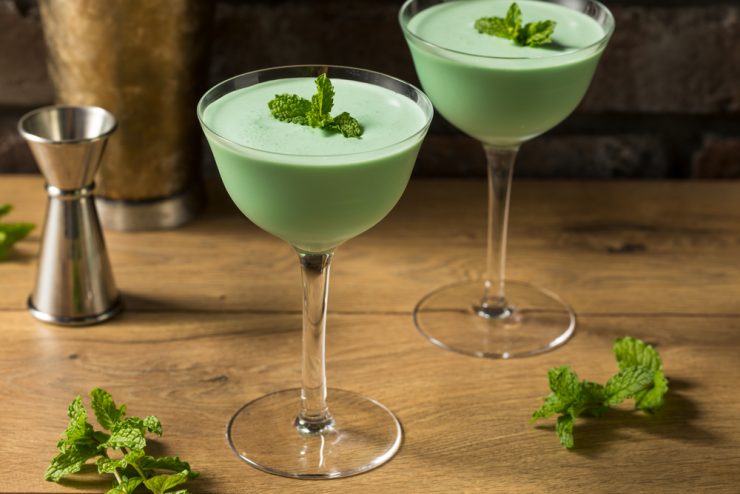 When it comes to drinking your desserts, the grasshopper cocktail is a great after-dinner boozy option. This sweet and creamy drink tastes like a grown-up version of a mint chocolate chip milkshake, plus it’s only made with three ingredients. Read on to learn more about the origins of this emerald brew and, more importantly, how to make one.

This brightly colored cocktail can chase its origins to the oldest stand up bar in New Orleans – Tujague’s – a Creole restaurant located in the historic French Quarter.

Sixty-two years after the bar was established and according to lore, the new owner, Phil Guichet, traveled to New York City to take part in a cocktail competition in 1919. His verdant green concoction took second prize at the contest and Guichet proudly took his new invention back to Tujague’s.

The new addition to the menu was short-lived as Prohibition gripped America during the 1920s. However, it’s rumored Tujague’s waiters would sneakily slip patrons a glass from their aprons. Once Prohibition was lifted, the chocolate-mint drink gained popularity during the 1950s and 1960s throughout the American South – it even inspired the pie that shares the same name.

You can still visit Tujague’s to take part in a story steeped with tradition and take part in a favored post-dinner indulgence. If you can’t make the trip out to New Orleans, it’s just as easy to make your own at home.

You can even kick it up a notch and forgo both the half and half or heavy cream for ice cream! The sky’s the limit for garnishes! You can top your beverage with chocolate sauce, whipped cream, chocolate shavings or sprinkles, and even a mint candy to give it an extra oomph.

Combine one ounce crème de menthe, one ounce white crème de cacao, and two ounces of your choice of half-and-half or heavy cream into an ice-filled cocktail shaker.

Cover the top of your glass and give your cocktail shaker a few good shakes to mix the ingredients. Take a stemmed cocktail glass and drizzle chocolate sauce around the inside. Pour your drink into the glass and top with whipped cream, chocolate sprinkles, or candy, if desired.

No matter how you make your mint-chocolate drink, you’ll be taking part in making a deliciously sweet cocktail with over one hundred years of history. Enjoy!