The Zombie was one of the first drinks to popularize blending a number of different rums in one beverage.

The recipe was a closely guarded secret when it was first developed, meaning that a huge number of imitations were made by people trying to copy the magic of the original. It has since become a globally popular Tiki cocktail.

History of the Zombie Cocktail

This legendary drink was created by Ernest Gannt aka “Donn Beach” in 1934. Cocktail lore tells us that the Zombie was invented to help a hungover client at the original Don the Beachcomber bar in Hollywood, CA get through a business meeting.

The high alcohol content was masked with more palatable fruit juice to try and cover up the customer’s lamentable state. Predictably, it actually made him feel like a zombie, and the meeting did not go well!

Donn used a coded system at the bar so only he and his bartenders knew what went into the drink. The secret recipe was finally decoded by cocktail sleuth Jeff “Beachbum” Berry who spent an entire decade working out how historic cocktails were made. The Zombie found fame at the New York World’s Fair in 1939 when it was featured on the menu of the Hurricane Bar.

How to Make a Zombie Cocktail

It is made traditionally with three different types of rum taken from all around the Caribbean. Not only does this add complexity and depth to the flavour, the powerful amount of alcohol means that the name is well deserved!

For a little extra authenticity add a splash of cinnamon-infused sugar syrup, which is thought to have been in “Donn’s Mix”, the top-secret recipe that Donn Beach used to add to his drink mixes. 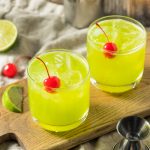 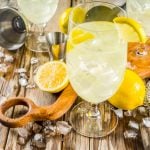