The Lions Tail is an uncommonly delicious drink that most consider being reminiscent of a daiquiri or whiskey sour. Its list of unusual ingredients may not seem like they would work well together, but it gives this cocktail a refreshing kick that’s smooth going down and finishes with a lively kick of citrus.

While it used to be a long-forgotten classic, it experienced a resurgence in popularity when allspice dram became available stateside circa 2008. Now, it’s available in cocktail bars everywhere.

The Lions Tail: A Brief History

The first written reference to this classic drink is in the 1937 tome entitled The Café Royal Cocktail Book, but it’s widely accepted that the drink was created sometime during Prohibition. Though the book was published in Great Britain, this cocktail was most likely created by an American.

What’s the reason, you ask? The drink’s name refers to a clever saying, “twisting the lion’s tail,” which is a saying meant to poke a little fun at the Brits since their royal coat of arms features an emblazoned lion.

The drink might have been more popular over the years, but for one thing: the recipe calls for Allspice dram, which was impossible to find in the U.S. until almost 2010.

The Austrian liqueur’s introduction to the U.S. coincided nicely with the release of a book entitle Vintage Spirits and Forgotten Cocktails by Ted Haigh, which also included a recipe for this classic cocktail. Now, it’s far more popular than it ever was, and it’s easy to see why: it’s just downright delicious.

This classic cocktail features allspice dram and bourbon, fresh-squeezed lime juice, Angostura bitters, and simple syrup. This drink is dark in color, with a richly spiced flavor profile that appeals to cocktail drinkers of all preferences.

While the allspice and Angostura bitters would overwhelm this cocktail’s delicate balance in larger quantities, they work perfectly together, accenting the bourbon quite nicely.

The fresh-squeezed lime juice adds in its own kick of tart citrus, and the simple syrup lends a bit of sweetness that makes this cocktail’s balance work so nicely.

While some might think that rum would work better in this recipe because of the lime juice, the bourbon adds some richness that brings this cocktail back down to earth. In fact, the sharp juxtaposition of the allspice dram makes the maple and vanilla notes in the bourbon shine through that much more.

What Is Allspice Dram?

If you’re unfamiliar with allspice dram, it’s made from the dried and unripe pimenta berry, a tree native to the beautiful and sunny Caribbean. This liqueur features cinnamon, nutmeg, and clove. Powdered allspice is widely available at any supermarket and is most commonly used in pumpkin pie.

The liqueur is actually made from crushed-up allspice berries, which are then added to rum. Then, some sugar is thrown in for balance, and there you have it—allspice dram, which works flawlessly with this cocktail.

No matter what your taste preferences, this cocktail has a little bit of something for everyone. Surprisingly, the bourbon pairs effortlessly with the Allspice dram and just a dash of Angostura bitters, making this drink perfectly balanced.

Then, it finishes off with a smooth kick of fresh lime juice, making this one lovely cocktail you’ll be asking for again and again. 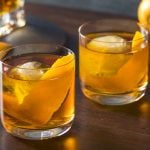