The original martini was invented more than a century ago, but we’ve seen all kinds of interesting variations on the classic formula over the years, including the French martini, which actually has little in common with its namesake aside from the fact that they’re served in the same glass.

Made with vodka, raspberry liqueur, and tasty pineapple juice, this fun and fruity cocktail is lovely to look at and even better to drink.

How to Make a French Martini

History of the French Martini

Despite the name, this drink wasn’t actually invented in France. The “French” part of the name comes from the fact that Chambord, a French raspberry liqueur, is used in the recipe.

Raspberry liqueurs of this kind have been produced in France for centuries, but the cocktail itself was actually invented in 1980s New York City, first served at a Big Apple bar owned by famed restaurateur Keith McNally.

A post shared by The Lifted Home Co. (@theliftedhome)

Back in the 80s, cocktails were undergoing something of a renaissance and martini knock-offs were becoming increasingly popular, with many bartenders and mixing enthusiasts across the globe were experimenting with the formula, introducing fruit juices and different spirits to create unique, flavorful blends.

Unsurprisingly, this fruity, beautiful mix was a big hit with the crowds of the time and has continued to be a popular drink right into the 21st century too.

There are several ways you can alter the recipe of this cocktail just slightly to enjoy different variations and taste experiences. Some recipes, for example, introduce creme de cassis liqueur in place of the Chambord, and other recipes may use differing amounts of juice and liqueur to get sweeter or more bitter results to suit different tastes.

You may also choose to exchange the vodka for other spirits. Whiskey can be added to the mixture, for instance, or you can try tequila instead for more of a “Mexican Martini”. Some bartenders have also experimented with adding gin and vermouth to the recipe to make the drink more closely resemble an authentic martini.

Like any martini, this drink will commonly be served as an apéritif, before a meal. It’s a refreshing drink with a lot of depth to the flavor, so it should be sipped and savored slowly.

The French Martini is an 80s classic that still holds up to this day, this cocktail is a surefire hit with fans of rich, fruity flavors. 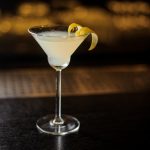 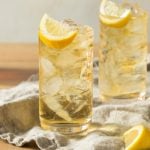