Imagine yourself in a world with no pitcher water filters, no safe drinking water flowing from a tap, and high rates of death–especially among the young and vulnerable–from mysterious intestinal disorders. Everyone seems fairly sure that dysentery has something to do with the water, but no one knows exactly what.

No one knows yet that boiling water is the way to render it safe to drink, so what do you do? If you’re like our colonial ancestors, you drink a lot of safe, sterile alcohol, including delicious hot buttered rum.

How to Make Hot Buttered Rum

Of course, the recipe we give you here is just one way of doing it. Be sure to experiment to find your favorite way to add butter to warmed-up rum.

Compared to today, colonial Americans drank an absolutely staggering amount of alcohol, and women and children drank as much as the men.

It wasn’t at all uncommon for farmers and others who engaged in heavy labor all day to regularly consume 6+ pints of cider or beer a day, starting at breakfast, and follow it up with harder stuff at night. The average consumption of alcohol was three times what it is today.

In 1770, the American colonies had 140 rum distilleries producing nearly 5 million gallons a year and imported another 4 million gallons from the Caribbean: all for a population of just over 2 million.

Cheap rum flooded the colonies: a splash rendered a cup of water safe to drink, while a glug with some creative additives made a great celebratory drink. It was a key social lubricant, and, because it was much cheaper than other liquors, was readily available even to most of the poor.

There are plenty of ways to enjoy this warming drink, and you can easily adjust the alcohol content by adding more or less hot water. Give it a try on a cold night after a hard day’s work. 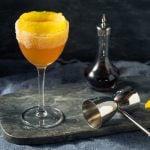 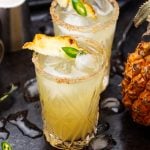