Simple to make and delicious to drink, the London Mule is a cool and refreshing classic first popularized in the 1950s.

It’s similar to a Moscow Mule but with gin instead of vodka. You can make one in minutes, and it’s also easy to customize.

How to Make a London Mule

You don’t even need a shaker to make a London Mule. Whipping one up takes only a few minutes.

About the London Mule

Originally created in the 20th century, the Moscow Mule found a surprising resurgence of popularity across the country in the early 2000s. Featuring vodka, ginger beer, and lime juice, it combines sophistication with simplicity. Still popular today, you can order a Moscow Mule in practically any bar in the country.

All three of the base elements in the drink can be switched around. Of all the variations you’ll find, one of the most popular is the London Mule, which keeps the ginger beer and lime juice but switches out the vodka for gin.

Nobody particularly knows where the London Mule was invented, as bartenders have been altering the Moscow Mule since its invention. The name is due to the inclusion of gin, a spirit strongly associated with London. (Along those same lines, the Mexican Mule uses Tequila, and the Kentucky Mule is made with bourbon.)

If you’re a fan of the often-bracing kick of the juniper berries, choose a London dry gin. However, if you enjoy a more citrusy taste, a modern, flavored gin is likely what you’ll prefer instead.

You have two options for ginger beer: homemade or canned/bottle. Both work well with a London Mule. However, you want to avoid using ginger beer in a shaker, as the carbonation can cause it to overflow.

If you’re a fan of the London Mule, but want a drink with a fresher taste, try the Gin-Gin Mule. It adds mint and simple syrup. To make a Gin-Gin Mule, you’ll need a shaker.

With how well-loved the classic Moscow Mule is around the globe, it’s no surprise there are some popular variations like the London Mule. This drink is perfect for gin-lovers, so give it try if that sounds like you! 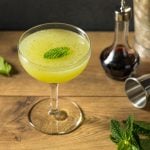 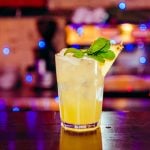