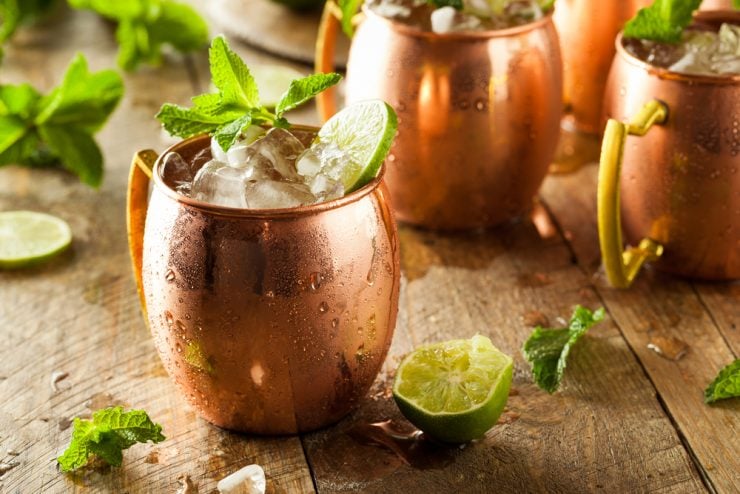 The Moscow Mule has one of the most intricate and interesting histories offered by any cocktail. The Moscow Mule cocktail recipe, and the iconic copper cups they’re served in, are legend.

The story of this cocktail begins with the Berezinski family and the Moscow Copper Company. Daughter Sophie took an interest in the company and designed her own (gorgeous) copper cup. When things got tough in Russia in the 20s, though, she took 2,000 of the cups and went to America, hoping to sell them and jumpstart her new life. Her plan was slightly altered by finding love in New York City, where she married and settled down.

In 1939, her husband laid down an ultimatum: find something to do with all these cups, or he was throwing them out. Sophie went out to–where else–Hollywood, where in 1941 she created the very first Moscow Mule at the Cock n’ Bull Pub. Three people were involved: Sophie, John Martin, who had just bought a dying vodka distillery–Smirnoff–and was having a terrible time getting his stock to move, and Jack Morgan, who owned the pub–and a brand of ginger beer he was having trouble moving.

With Sophie’s gorgeous cups, Martin’s vodka, and Morgan’s ginger beer, the iconic cocktail was made. It took a few tries, and some fails, before they got the perfect flavor and temperature, but once they landed on the final recipe, they knew they had a winner. Not only did the drink taste and smell amazing, but the copper cups kept it just the right temperature.

They took pictures and promoted the drink (and Smirnoff vodka) all over America, and particularly among Hollywood A-listers. It remained a highly popular drink until the Cold War, when hard feelings towards Russia tanked sales.

Thankfully, the drink was revived after a few years, and today it’s one of the world’s most popular drinks. In fact, you can even drink an “authentic” one, since Sophie’s descendants and the Moscow Copper Company still sell the original mug design online.

There are some variations, which we’ll go over, but we recommend you at least try the original recipe developed by Sophia, Jack, and John.

We recommend a top-shelf vodka. Always freshly squeeze your lime juice and choose a ginger beer that’s made with real ginger (not ginger flavoring) and no corn syrup. Craft ginger beer is the way to go here.

For variations, you can’t beat the Kicking Mule, which muddles in a couple of slices of jalapeño. We also have to recommend the Peach and Ginger Mule. Some flavors just taste amazing together, like peach and ginger. Add an ounce of ginger-peach puree and some candied ginger for garnish.

There’s a reason this cocktail is a world-favorite. If you’ve never tried one, tonight’s the night!