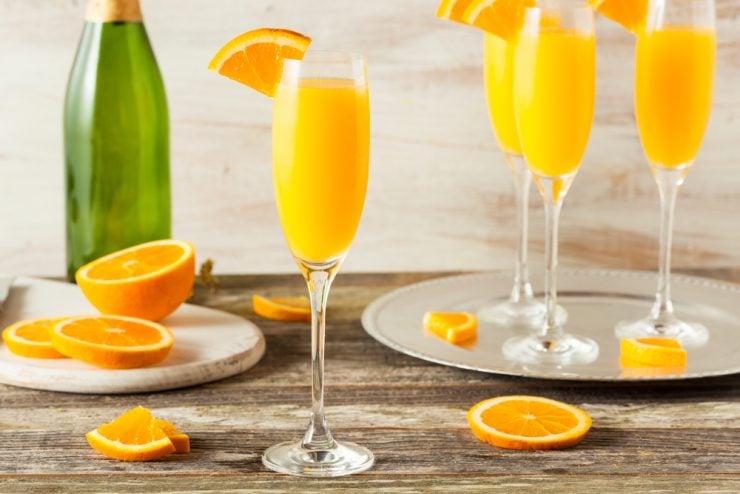 Everybody has heard of the Mimosa: this brunch staple is one of the few cocktails that’s universally considered acceptable to enjoy before the strike of noon. This super simple cocktail is also very easy to make, consisting of equal parts sparkling wine and orange juice. As with any cocktail that requires juice, fresh-squeezed is always best. No matter what time of day you decide to drink this refreshing cocktail, you’re sure to love its sparkling citrus taste!

Brief History of the Mimosa

No brunch is ever really complete without a Mimosa (or two!). While this drink’s history is a bit cloudy, there’s no doubt that it began life as a variation on the Buck’s Fizz cocktail. They have the same two ingredients, but the ratio is different: it calls for twice the champagne. Buck’s Fizz was invented as an excuse for a gentleman to drink before lunch, so it’s fitting that the Fizz’s twin has ended up as mandatory fare for brunchers everywhere.

However, this bubbly citrus cocktail might have been invented when a bartender named Frank Meier created it at the Ritz Hotel in Paris, France. Though he listed this in his book, Artistry of Mixing Drinks, he never officially took credit for inventing this delicious cocktail. Other rumors state that horror movie legend Alfred Hitchcock was the actual creator. While he most likely didn’t invent this orange-colored cocktail, he definitely helped it become the popular drink it is today.

This drink was popular in the UK and Europe upon its creation, as the Royal Family was well-known to enjoy it as a pre-dinner drink, although the “Orange-Champagne,” as they called it, was just chilled champagne poured over some orange juice. Here in the U.S., it didn’t blow up until about the 1950s.

It used to be that the Bloody Mary was the go-to drink of choice at brunch—however, that was not to be for long. This fruity champagne-orange mix quickly usurped it as the most popular cocktail to imbibe in before noon, and it’s remained insanely popular to this day.

Like every other classic cocktail ever invented, this orange cocktail has been subject to plenty of variations. Many of these simply substitute different fruit juice in place of the orange juice. Here are some of the most popular variations:

If you’re going the traditional route, be sure to measure the ingredients correctly. Remember, it’s equal parts sparkling wine and orange juice. Though you might think that adding some more orange juice would be delicious, it actually overpowers the delicate flavor of the wine rather than complementing it. For an added touch of class, use a champagne flute. 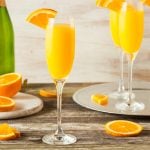 This sparkling orange cocktail takes the cake when it comes to fresh, fruity, and fun drinks. The fresh-squeezed orange juice is accented perfectly by the sparkling wine to create a drink that’s as refreshing as it is delicious. Be sure to use equal parts orange juice and champagne to keep the delicate flavor balance and let the sparkling wine shine through. This refreshing orange-champagne blend offers a classy way to enjoy a cocktail, no matter what time of day it is.