As the national cocktail of Bermuda, the Rum Swizzle is a fan favorite, both in this island nation and in Tiki bars all over the world.

The concept of swizzles, drinks that are swirled with a special type of branch to create a frosted effect on the outside of the glass, has been around since the 18th century, and the Bermuda Rum Swizzle recipe has been refined over the years.

Read on to find out more about this fruity cocktail that reminds many drinkers of the Mai Tai.

How to Make a Bermuda Rum Swizzle

In addition to your ingredients, make sure to get high-quality swizzle sticks. Try to avoid plastic versions and go for wooden sticks instead to make your drink as close to the original as possible.

History of the Bermuda Rum Swizzle

In the West Indies, swizzling is part of the culture and the majority of beverages are made using this technique, even hot chocolate. The Rum Swizzle has been around for three centuries, but the modern recipe was developed at the Swizzle Inn, Bermuda’s oldest pub.

Since then, it has been served at several famous events, such as the world’s first cocktail party, which was held in London in 1924.

About the Bermuda Rum Swizzle

The basic ingredients of a Rum Swizzle are rum, fruit juice, and a sweetener, which could be either grenadine or falernum. It’s common that a mixture of several rums and juices is used, and the traditional Bermuda version calls for two types of Gosling’s rum, which is a black rum local to the area. When using orange juice, it’s important to opt for a fresh version, so that you and your guests can enjoy the original taste of this cocktail.

Another key component is the stick, which should ideally come from the Swizzle Stick tree native to the area. It features several prongs that run horizontally and allow the famous swizzle effect to occur.

Originally, the bark on the sticks would have changed the flavor of the cocktail, adding a spicy and slightly bitter flavor. Nowadays, most swizzle sticks have had the bark stripped away, which is why we add Angostura bitters to the mix.

Bermuda’s national cocktail is an aromatic and fruity mixture of rum and juice that belongs to the swizzle family, a unique type of drink originating in the West Indies. Because of its great taste and this fun effect, the bright yellow or orange drink is a favorite all around the world and is sure to delight your guests. 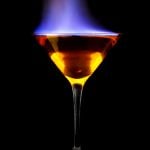 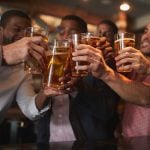