When it starts to get chilly outside and the leaves begin to change, sometimes you need a bit of spice to warm you up.

Cinnamon always does it for me, especially when it’s incorporated in a stiff cocktail.

The beauty of cinnamon cocktails is that they can be made sweet or a bit spicy, served warm or cold.

So, with Autumn approaching, I recommend taking a look at this list of what I consider to be the absolute best cinnamon cocktails to make this season. 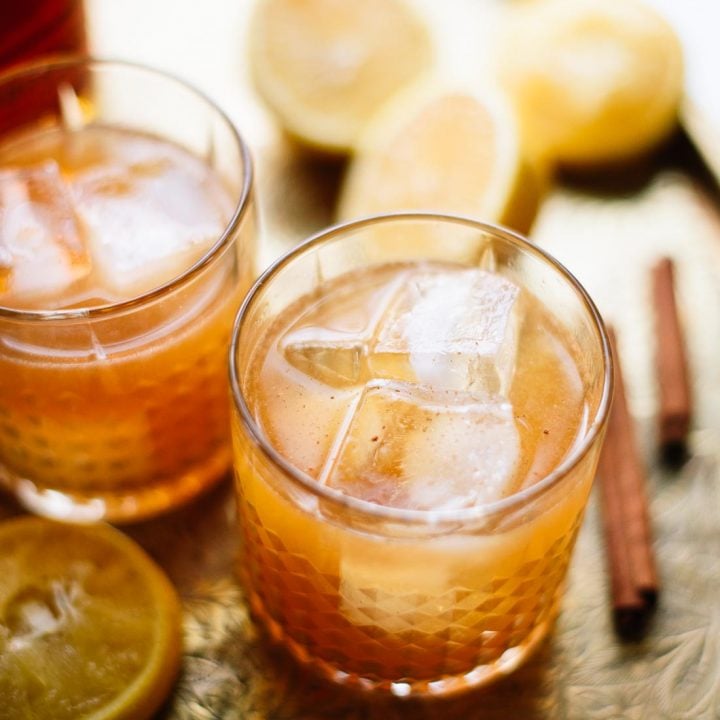 Starting with something simple, the Cinnamon Maple Whiskey Sour is a perfect way to kick off the season.

I﻿t's just like a classic Whiskey Sour but with a bit of a spicy-sweet twist.

T﻿his cinnamon cocktail recipe is easy to make in larger batches for a group of friends, too. 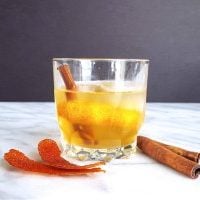 If a regular Old Fashioned sounds a bit boring to you, then why don't we spice it up a bit?

t﻿he blood orange and the cinnamon work wonders together in this cocktail. It's sure to give you a nice warm, fuzzy feeling while you sip.

J﻿ust pick out your favorite bourbon and mix one up! 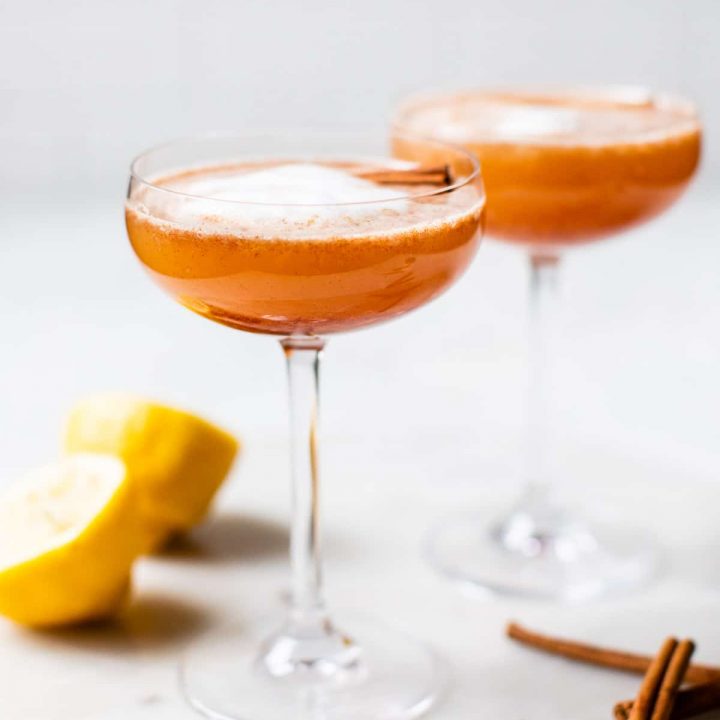 The Cinnamon Tequila Sour is the next one up and I think you'll really love this one, especially if you enjoy tequila cocktails.

The egg whites are optional but I highly recommend them. 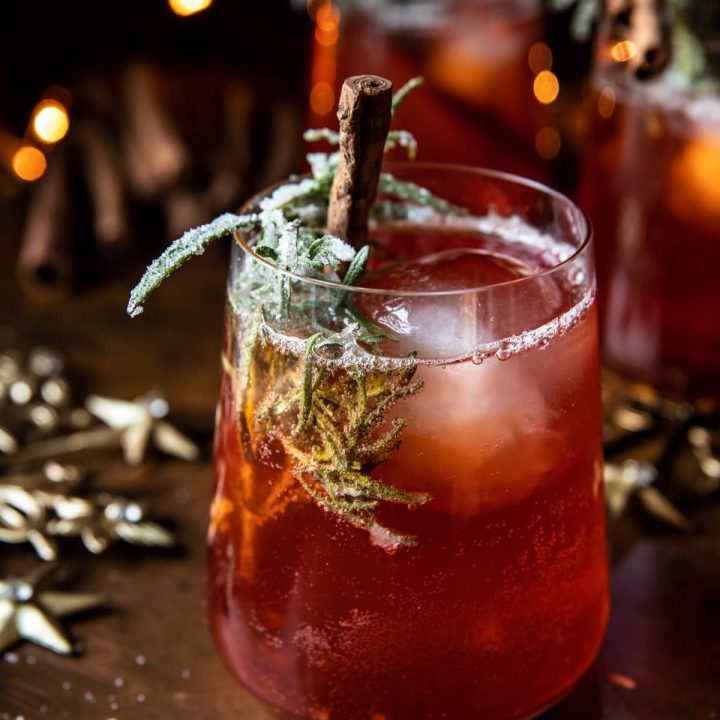 The Cinnamon Bourbon Fizz takes a bit more effort than some of these other cinnamon cocktails but it is all worth, trust me.

You need to mix up some cinnamon honey simple syrup, first. Don't worry, it's easy!

A﻿fter that, all you need is your favorite bourbon, some aperol, lemon juice, bitters, and a touch of sparkling water. 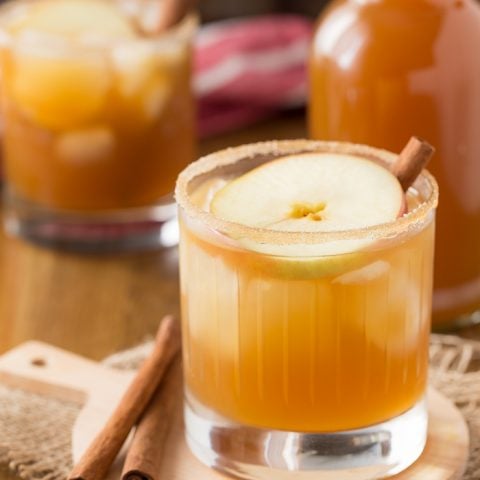 Who doesn't love apple pie? I certainly do, and it's even better in cocktail form!

T﻿his one is easy as pie, so you don't need to be a mixologist to pull it off. Plus, this drink never fails to impress guests.

I﻿ recommend paying a little bit more and getting some high-quality apple cider for this one. It's worth it! 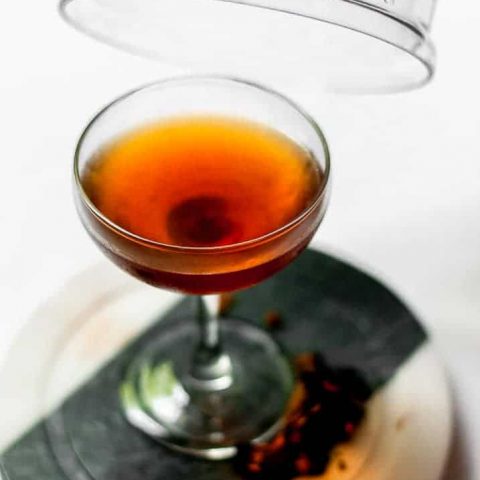 Even the most classic cocktails can be improved with a touch of cinnamon, and the Manhattan is no exception.

T﻿his is another simple cinnamon cocktail to try this fall and it requires no mixing of simple syrup, just a shaker cup.

T﻿his one will really warm you up! 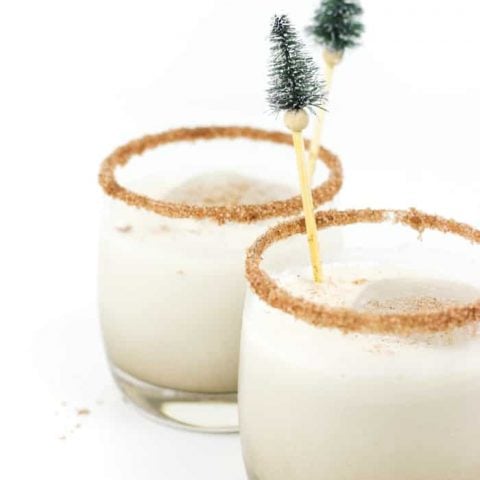 White Russians are one of my favorite drinks all year round, but during the fall I like to add a dash of cinnamon.

T﻿his recipe calls for cinnamon simple syrup and a cinnamon-sugar rim. It really enhances the experience, if you ask me! 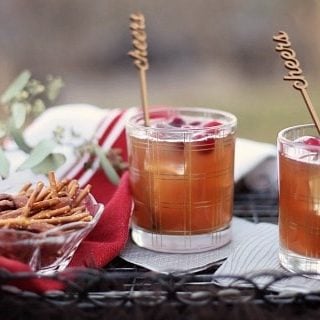 This Cranberry Cinnamon Cocktail is a phenomenal balance of sweet, sour, and spicy all at once.

N﻿ot to mention, this is probably the easiest cocktail on the list, so it's perfect for a Fall evening out by the fire where cocktail ingredients may be limited. 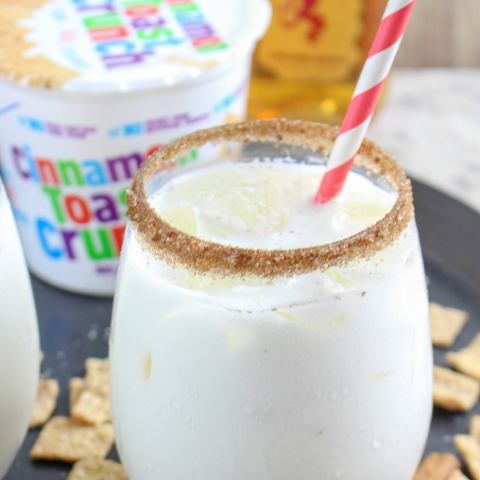 Now, for a really fun cinnamon cocktail. All you cereal lovers out there will thoroughly enjoy this one.

All you need is R﻿umchata, Fireball whiskey, and some half & half cream combined in a shaker and poured into a cinnamon-sugar-rimmed glass is all it takes to craft this sugary masterpiece.

P﻿erfect for a Sunday morning brunch! 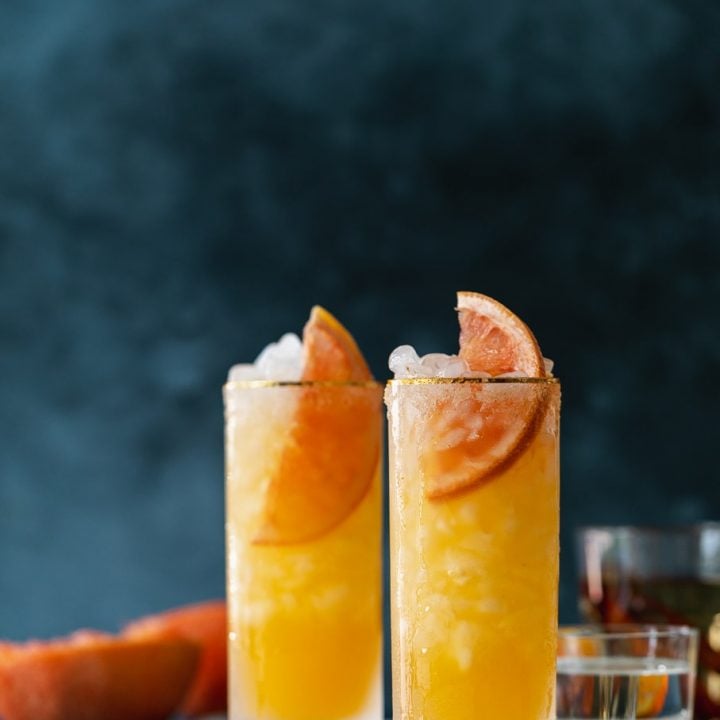 Speaking of brunch, the Cinnamon Grapefruit Paloma is another favorite of mine if I'm not in the mood for a mimosa and I want a taste of cinnamon.

T﻿he cinnamon-citrus combo is strong and definitely not for everyone, but I find it to be incredibly refreshing.

A﻿lways make sure you get fresh-squeezed juice for your cocktails if possible! 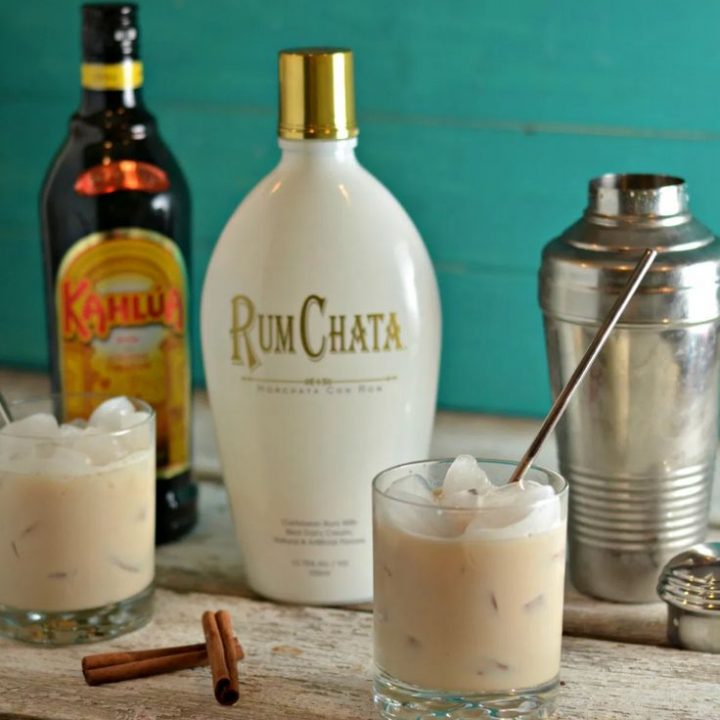 Another contender for the easiest cocktail on the list is the Cinnamon Roll Cocktail.

T﻿his tasty cinnamon cocktail has two ingredients: Rum Chata and Khalua. You can garnish with a stick of cinnamon, but that is not essential.

T﻿his one is creamy, sweet, and always a hit at Fall gatherings. 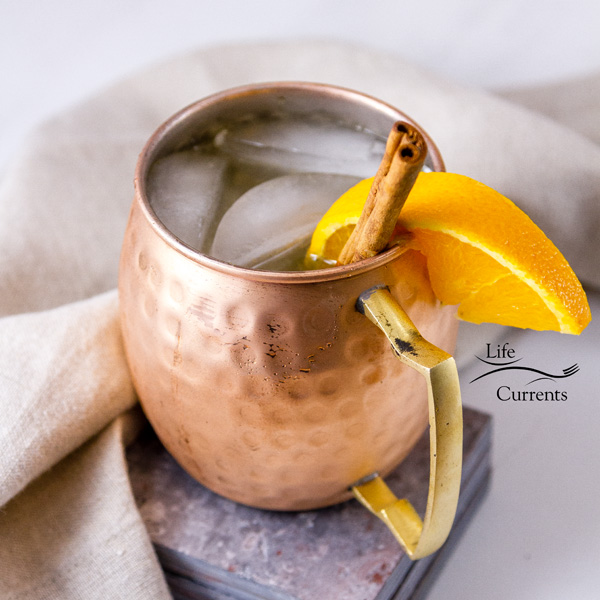 This is a cinnamon cocktail that I really wasn't sure about until I tried it myself.

T﻿he Orange Cinnamon Moscow Mule sounded strange at first, but now I almost like it more than a traditional Mule.

T﻿he only drawback is that you need to either mix or buy cinnamon simple syurp for this one. 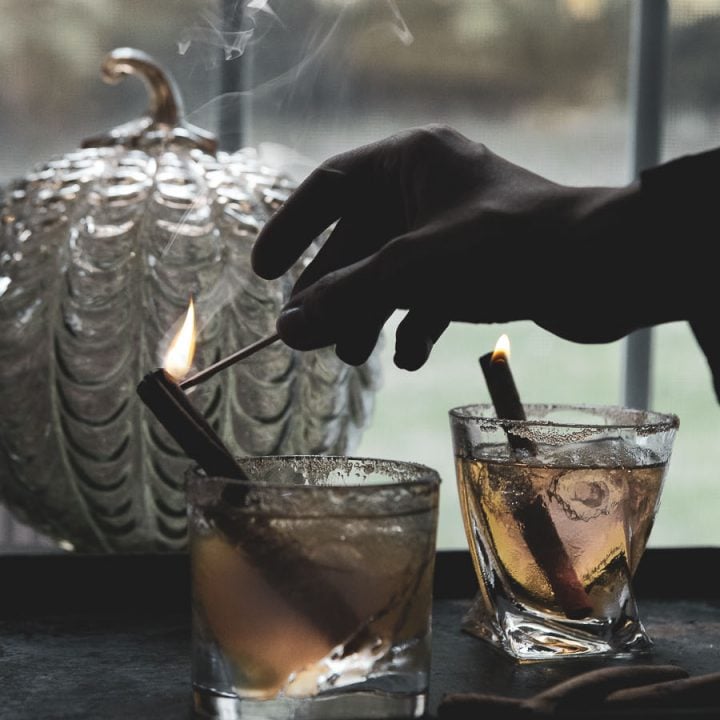 The Smoked Cinnamon & Maple Whiskey Sour is delicious and gets bonus points for presentation.

B﻿ourbon, simple syrup, lemon juice, and maple syrup are all you need as far as ingredients go.

A﻿fter mixing, simply garnish with a cinnamon stick, light it on fire, and serve it to your friends! 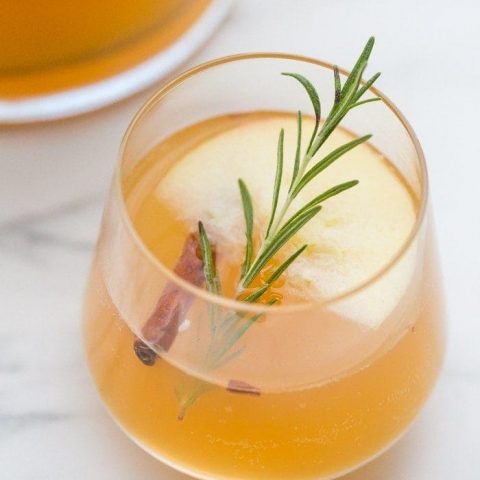 Back to brunch for a second! I want to mention the Cinnamon Apple Cider Mimosa.

I﻿t's just like your typical mimosa, but instead of orange juice, you use apple cider and add a bit of cinnamon whiskey.

As always, I recommend buying quality apple cider. It makes for a big difference in taste! 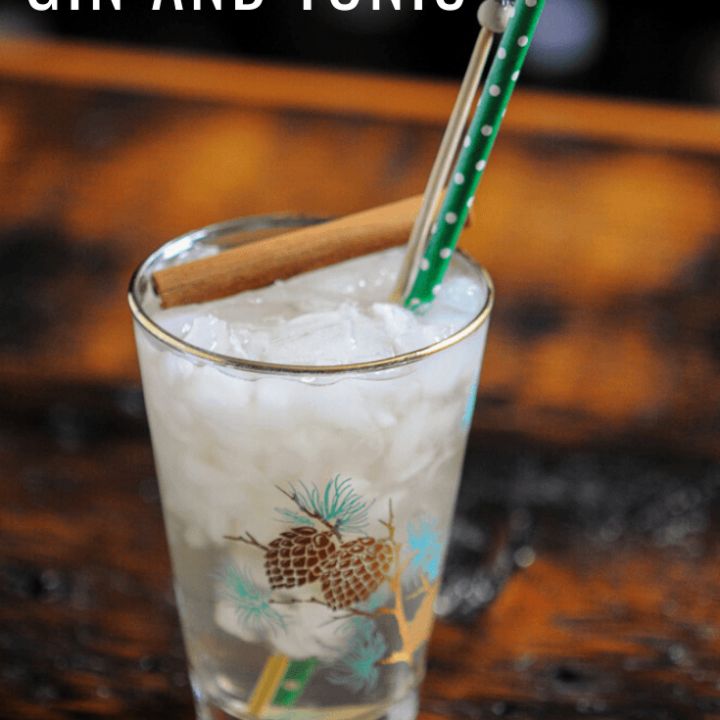 Lastly, I thought I'd include something for anyone reading this who happens to like gin drinks.

T﻿his recipe requires you to make spice-infused amaretto, but it's not that much work, really.

A﻿fter that, just mix it with some gin, triple sec, and tonic! It's a very creative cocktail that blew me away when I tried it.

These are all of my favorite cinnamon cocktails that I think you should try this Fall and Winter season.

Whether you like your cocktails sweet, spicy, or a bit sour, this list has something for everyone!

If you want some more specialty cocktails for the cool weather, be sure to check out our favorite fig drinks!

Which cinnamon cocktail do you like best? Leave us a comment down below and let us know! 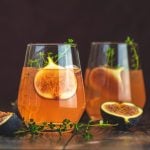 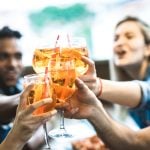